FOOTBALL fans have revealed how they show their love for the beautiful game – including banning rival team colours in their home, watching 100 hours of matches a year and naming kids after players.

The poll of 2,000 footy-loving adults found their obsession has resulted in them pulling sickies at work so they can watch key games and booking their holidays to avoid matchdays.

Tattoos, football-themed weddings, and personalised car number plates are also ways fans have demonstrated their affection for their favourite team.

More than half (51 per cent) even admitted their preoccupation with soccer has led to them forgetting important things – like anniversaries and birthdays.

And when it comes to Christmas shopping or other festivities, 31 per cent admit it isn’t going to happen until all this winter’s international matches are done and dusted.

Even then, 84 per cent said their thoughts will immediately turn to the domestic league re-start. 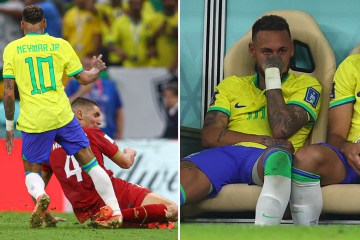 Neymar in tears after suffering injury from horror challenge vs Serbia 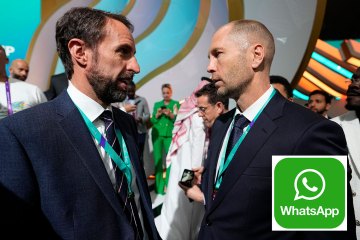 Snickers, which commissioned the study, has teamed-up with Ross Kemp to create personalised ‘Matchday Reminders’, to help fans remember significant things while their thoughts are elsewhere.

Ross Kemp said: “Like most fans, for 90 minutes the beautiful game and my team come first.

“That can lead some of us to forget the other important things in life that our friends and partners have asked us to do.

“Such as putting the dinner in the oven, feeding the cat, taking the dog for a walk, doing the washing up and – oops – picking the kids up.

“As a guilty party, I’m turning over a new leaf and will be sending out match day reminders to other fans to keep them on top of their game and the washing up – and give them a laugh too.”

The study also found 38 per cent, of those polled, are self-proclaimed football obsessives – typically thinking about it for 28 minutes-a-day.

On average, their love of the game goes back an average of 17 years and most commonly began when they were taken to a match as a child (40 per cent).

But while 79 per cent believe their love of the game is healthy, it can have its draw backs at times.

Seven in 10 (71 per cent) are so enamoured with the sport their thoughts have been known to drift towards it when perhaps they shouldn’t.

Which might go some way to explaining why the study, carried out through OnePoll, found 38 per cent consider football or their favourite team to be their ‘true love’.

A spokesperson for Snickers said: “The research proves that football is a massive part of people’s lives.

“Whether you’re a fan or not, it’s likely you’ll catch a match this international winter season.

“We’ve launched Snickers Matchday Reminders special packs to help fans remember that there is a world outside of the game, even if it’s just for the time it takes them to eat the bar.”

How to unlock every Word of Power in Marvel's Midnight Suns

Game24.pro
Geralt and other Witcher characters will arrive in Lost Ark next year Just two years after release, DJ rhythm game Fuser is being delisted Genshin Impact goes to war against leakers, sues Discord to find leaker's real identity How to unlock every Word of Power in Marvel's Midnight Suns

Today24.pro
Man repeatedly punched Columbia protester, knocking her out: NYPD ‘People need to stop getting mad at non tippers and start getting mad at the apps’: Lyft driver paid $50 for ride that cost $242 Best Android app 2022 – Google reveals top pick for the year and it’s totally free Five ways struggling families can get free cash to help pay for food this Christmas