﻿
Ru24.netNews‑life.proNews‑life.org29ru.net123ru.marketSportsweek.orgIceprice.info123ru.net
Цепочки на шею
Association Head Says Rohingya Still Face Genocide
Nepal votes counted, but new government could take days
I’m obsessed with Lush’s Snow Fairy so threw it in with my washing to see what happened and the results were amazing
Honeysuckle named Horse of the Year the day after losing for first time ever as retirement rumours swirl
Is 'Firefly Lane' Getting a Season 3? Here's When New Episodes Will Premiere on Netflix
ApeCoin is up 6% as owners invest $32 million in the Ethereum-based Ape Token

IRANIAN athletes are not free from the brutal and bloodsoaked hand of the regime no matter how much glory they bring to their home nation.

At least six sports stars are known to have been executed – often facing trumped up charges simply for speaking out against ruthless Tehran.

Iran’s national football team appeared to cave to pressure today as they mumbled their way through the country’s national anthem before their game against Wales at the World Cup.

The team had been warned they could face prison or death when they returned home after refusing the sing ahead of their opening game in Qatar against England.

Iranian officials and clerics offered veiled threats of punishment facing the players ahead of today’s match.

Fans booed, jeered and were left in tears during as the players looked miserable as they sung the anthem – but perhaps they were hoping to escape the terrible fate that met these athletes. 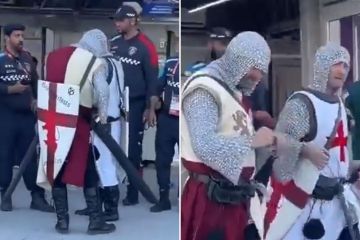 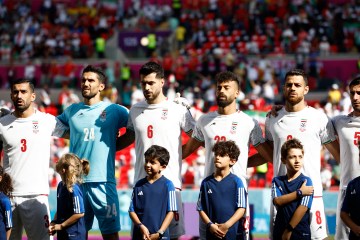 Footballers, boxers and others have been hanged or shot for speaking up against the regime.

Protests continue to sweep the country over the death Mahsa Amini, who was beaten to death by Tehran’s morality police.

The 22-year-old has become a symbol of resistance and women’s rights in Iran.

But thousands of people have been arrested and hundreds killed during the uprising which has been raging since September – with the protests spreading to all parts of life in Iran, including sport.

Iran hanged champion wrestler Navid Afkari two years ago on trumped up charges for killing a security guard during protests.

He is believed to have been tortured and forced to sign a confession letter.

Handwritten letters from him detailed 50 days of beatings and attempted suffocation.

“The Islamic Republic of Iran is about to execute an innocent person,” he said in a final voice message.

Navid was hanged – and his death sparked outrage around the world, with even then US President Donald Trump decrying Tehran.

Described as the closest thing Iran has ever had to American national hero Kobe Bryant, Habib Khabiri was hanged by Iran.

He was the captain of Iran’s national football team and a hero.

But he was arrested and executed when he was aged just 29, being hanged for being a member of a dissident group.

He was killed among 40 others at the notorious Evin Prison.

“Sometimes when I watch Kobe Bryant, I see Habib Khabiri. He was only 16 or 17 when he started to play for the national team. He was a very creative player.

Another footballer who played alongside Habib, Mahshid Razaghi was a member of the Iranian team that went to the Olympics.

He was arrested for selling anti-government newspapers – and was sentenced to one year in prison in 1980.

But the footie star was never released.

Mahshid was left rotting in jail until 1988 – when he was executed along with a wave of other political prisoners as part of the infamous massacres by the Death Commission.

His brother Ahmad was also executed just days later, with up to 30,000 people estimated to have been killed in the purge.

Another high profile athlete, Foruzan Abdi was the captain of the Iranian women’s national team.

She was arrested in 1981 and sentenced for eight years in prison for supporting a dissident group.

Just like Mahshid, she was never released from her prison.

And she was killed along with thousands of others as part of the 1988 purge.

Iran killed kickboxer Majid Jamali-Fashi after a show trial which was shown on TV.

He was accused of working for Israeli spies and assassinating a nuclear scientist in Tehran.

Pictures were paraded on TV of an Israeli passport said to be his – only for it to be exposed as one edited from Wikipedia.

Majid is alleged to have been tortured into to confessing, and he is believed to have doomed after being mentioned in a leak by Wikileaks.

Five years after he represented Iran at the Olympics as a wrestler, Houshang Montazeralzohour was executed by firing squad.

He was a national champion in his weight class and competed for the his country at the Summer Olympics in Montreal.

Houshang was allegedly tortured and then shot dead by firing squad.

Why the power grid is an 'attractive target' for domestic terrorists: report

Today24.pro
Hans Niemann in the sole lead at the 3rd El Llobregat Open In the age of megachurches, communion has become a big business The Darkest Secret and Tragedy of Edwin Valero Why the power grid is an 'attractive target' for domestic terrorists: report