Toyota Gazoo Racing announced on 25 November its domestic and international race entry structure, including their GT500 team and driver lineups for the 2023 Autobacs SUPER GT Series. Toyota will continue to participate with the Toyota GR Supra GT500, supporting six teams through Toyota Customizing & Development (TCD). This past season, the fifth-generation GR Supra […]

Toyota Gazoo Racing announced on 25 November its domestic and international race entry structure, including their GT500 team and driver lineups for the 2023 Autobacs SUPER GT Series.

Toyota will continue to participate with the Toyota GR Supra GT500, supporting six teams through Toyota Customizing & Development (TCD). This past season, the fifth-generation GR Supra won two races and five pole positions. As the GR Supra begins its fourth season as Toyota’s GT500 challenger, they hope to win both the Drivers’ and Teams’ Championships for the first time since its introduction in 2020. 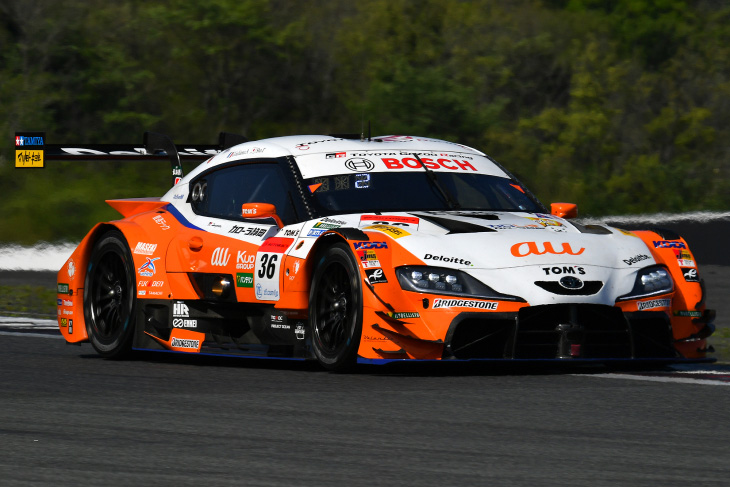 The only lineup changes in Toyota’s six-car GT500 fleet are within TOM’s Racing, who will continue to run two cars in 2022.

2021 GT500 Champion, Sho Tsuboi, will continue as the first driver at TGR Team au TOM’s, carrying the TOM’s Racing flagship number 36. For 2023, he will be joined by Ritomo Miyata, who transfers over from the number 37 TOM’s crew after one season.

Alesi will embark on his second GT500 campaign along with a new driver, who will be confirmed at a later date. This new driver will take the place of Sacha Fenestraz, who departs Toyota after three seasons to join Nissan in the FIA Formula E World Championship.

The other four teams remain unchanged from the 2022 season. TGR Team Eneos ROOKIE (ROOKIE Racing) will retain the 2019 GT500 Championship-winning pair of Kazuya Oshima (35) and Kenta Yamashita (27), who have won the opening race in the last two seasons. Oshima and Yamashita finished fifth in the GT500 Drivers’ Championship this season, the highest-ranked Toyota team.

After a season marked by impressive qualifying performances, TGR Team WedsSport Bandoh (Racing Project Bandoh) will retain experienced veteran Yuji Kunimoto (32), the 2016 Super Formula Champion, and second-year GT500 driver Sena Sakaguchi (23), who won three out of the team’s leading four pole positions in 2022. The team will continue their long-standing relationship with Yokohama Rubber and will continue to be the only Toyota team using Yokohama tyres, with all other teams on Bridgestone tyres.

For the ninth consecutive season, veteran drivers Yuji Tachikawa and Hiroaki Ishiura will return to TGR Team ZENT Cerumo as they look for a return to form in 2022.

This season is also a landmark campaign for the 47-year-old, three-time GT500 Champion Tachikawa, who will embark on his record 25th consecutive season as the ace driver of Team Cerumo. Tachikawa also became the first driver to record 200 career starts in the GT500 category this past season. 41-year-old Ishiura, the 2007 GT300 Champion and two-time Super Formula Champion, continues his pursuit of a first GT500 title.

Finally, the lineup at TGR Team SARD remains unchanged as the #39 Denso Kobelco SARD GR Supra will continue to be driven by 2021 GT500 Champion Yuhi Sekiguchi (34) and Yuichi Nakayama (31), the latter of whom begins his fifth season with SARD.

Yamashita, Kunimoto, Oshima, Sekiguchi, Miyata, Tsuboi, and Sakaguchi will also drive for Toyota in the Super Formula Championship, along with Toyota Gazoo Racing WEC drivers Ryo Hirakawa and Kamui Kobayashi, and TGR-DC prospect and 2022 Super Formula Lights Champion, Kazuto Kotaka. Only one open space remains in the Toyota Super Formula fleet, which is the #36 Team TOM’s entry that was driven by Alesi in 2022.

Toyota’s range of supported GT300 teams and driver lineups will be announced at a later date.

Today24.pro
One of The Greatest Britons in History - Joe Calzaghe How veterans with disabilities can get a VA loan with bad credit LAMB BUTTER Will Melt in Your Mouth! Ancient Food on the Silk Road! RoboCV: stacker robot