The American defeated some of the division’s greatest, including Evander Holyfield and Vitali Klitschko.

And he did so weighing 15 stone in the prime of his career, later retiring in 2009.

But after hanging up his gloves, Byrd underwent a dramatic body transformation and wanted to return at MIDDLEWEIGHT.

At one point, he weighed 11st after slimming down on a plant-based diet and eyed a boxing comeback after turning 50.

He said: “What am I known for? Slickness, speed and reflexes. 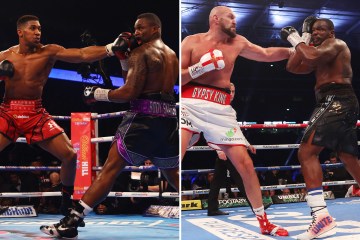 Joshua and Fury called out by Whyte as heavyweight eyes rematches

“I will be a middleweight champion definitely. Let’s get it.”

Now 52, Byrd appears to have cooled off on talk of a comeback.

KISS FROM A ROSE

During his heyday, he reigned as a two-time heavyweight champ but actually competed at middleweight during his amateur career.

It was only after lacking willing contenders did Byrd physically chew his way up to heavyweight.

He said: “Nobody wanted to fight me at middleweight, so I ate my weight up to heavyweight.

“Due to this, I paid for it. I went through eleven years of suffering. A few years ago, I couldn’t even move my feet apart.

“The pain in my left leg was so bad that I just wanted to cut the whole off some day.

“I had to make drastic changes and choices in life to get where I am today.”

Today24.pro
Man repeatedly punched Columbia protester, knocking her out: NYPD I can't be silent... If you saw children on the roof… How veterans with disabilities can get a VA loan with bad credit