PAIGE SPIRANAC has slammed trolls who fat-shamed her following her appearance on TV at a baseball game.

The former pro golfer was asked to do the opening pitch as the Milwaukee Brewers hosted the New York Yankees in Wisconsin.

But following her pitch, Spiranac was the victim of a number of vile trolls who sent abusive messages.

On her Playing a Round podcast, she revealed some of the comments she had been sent.

She said: “People were absolutely roasting me. And this was after a video I posted a couple days prior where people were fat shaming me. I’ve been called fat before from trolls but not at this level…

“Here are some of the comments; ‘Not that cute from this video she looks like a disgusting pig.’ 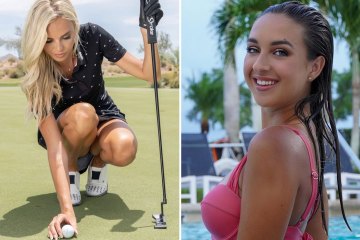 PartyCasino offer: How to claim an incredible 120 FREE SPINS on Starburst

“‘Looks like she got some fillers injected before the game she can be on the next episode of botched’, ‘talk about a butter face’, ‘brave of her to show up looking like a fat disgusting pig’.”

Spiranac admitted she did not handle the comments particularly well.

However, after saying she had gained some weight, she hypothesised that her weight gain was down to her feeling the happiest she had ever been.

Most read in Golf

She added: “I am the happiest I feel like I’ve ever been and that is probably why I have gained a little weight.”

Spiranac called out the trolls on her Instagram page last week, revealing she had to delete a number of comments on a previous post.

She has an incredible 3.6million followers on her Instagram, where she regularly posts snaps and videos for fans.

LIV rebel Bryson DeChambeau – who is dating rising star Lilia Schneider – was trolled by Spiranac after he was “almost decapitated” after running into a spectator rope.