IN a summer of unprecedented travel chaos, distraught holidaymakers have stood powerless as queues snake into airport car parks and flights are cancelled.

But this is just the tip of the ­iceberg.

In a summer of unprecedented travel chaos, distraught holidaymakers have stood powerless[/caption] Queues have snaked into airport car parks and flights cancelled[/caption]

For the past few weeks, I’ve been investigating what is going wrong at our airports.

The result, Airport Chaos Undercover: Dispatches, is required viewing for anyone planning to fly abroad.

We hear from a whistle-blower who says pilots feel under pressure to fly when fatigued.

We witness first-hand the frustration of overworked baggage handlers buckling under the pressure. 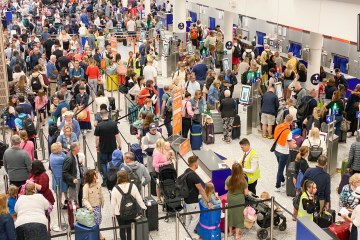 Long airport queues at 4.30am as passengers turn up too early for flights We see the desperation of passengers whose longed-for holidays are ruined by delays or cancellations.

And we hear claims that some airlines are ignoring customer calls to avoid paying compensation.

Research carried out for Dispatches by air travel data provider OAG estimates that, since January, 1.7million people flying into or out of the UK have been affected by cancellations within 48 hours of their flight.

Melissa Robinson, from Leeds, was one of them when, after two years spent planning her dream wedding in Cyprus, family and friends had their TUI flights cancelled from Manchester.

EK OF A GAME PLAYER

They rebooked on to a Wizz Air flight from Doncaster, then that was cancelled too. Others had to travel to Gatwick and Bristol for replacement flights.

The wedding went ahead, but not before they had paid out nearly £4,000 to get everyone there.

TUI told us the flight was delayed by “baggage handling issues,” apologised and provided refunds for the alternative flights.

Baggage handling is a key factor in whether a flight hits its scheduled departure slot and, as we have seen at Heathrow, it can result in unclaimed luggage mountains if passengers end up flying, or arriving home, without their cases.

Manchester airport is the UK’s third busiest and usually handles around 27million passengers a year.

But it was virtually mothballed during the pandemic and, when travel restrictions were lifted in March, it clearly was not prepared.

Nor was Swissport, which loads luggage for several airlines countrywide but cut more than half of its 6,000 ground handling staff when Covid hit.

An undercover Dispatches reporter got a job with them at Manchester airport, and hidden camera footage shows the frustration of overworked handlers who often start at 3am and get paid £9.67 an hour — just 17 pence more than the national living wage.

“F***ing chaos here . . . just literally no staff,” says one as he struggles to haul large suitcases on his own.

Research carried out for Dispatches by air travel data provider OAG estimates that, since January, 1.7million people flying into or out of the UK have been affected by cancellations within 48 hours of their flight.

Another tells him: “We used to have about 200 baggage handlers  . . . when the pandemic struck they got rid of most of them.”

We saw luggage log jams, flights delayed because bags — including those of cabin crew — were not loaded in time, priority bags thrown into general crates and footage of a desperate passenger poking her head through the conveyor belt hatch in search of her suitcase. A baggage handler at Manchester airport reveals: “It ­happens all the time. People try coming through, start fights.”

As his two-week stint ended, our reporter concluded: “I just don’t know how people do these shifts and these kind of hours starting at 3am. It’s absolutely brutal and no one gives them much credit.”

Swissport told us it has hired more than 4,100 people nationwide since January.

On July 2, I flew to Corfu from Manchester airport and filmed the experience.

The queue for the EasyJet bag drop started in the car park and it took me an hour and a half to reach the front. The queue to get through security was even worse.

Recent passenger footage of pilots helping to load bags on to planes at Manchester and Edinburgh airports shows they are as frustrated as everyone else by this summer’s chaos, and some say they are under pressure to fly when feeling fatigued.

The Civil Aviation Authority regulates the hours pilots work, and makes them personally responsible for not flying if they suspect they are dangerously fatigued.

But, speaking to Dispatches, one Wizz Air pilot told us: “There’s a shortage of crew and to avoid ­cancelling flights they encourage staff to work harder.

“There’s pressure for us to help out by flying on our days off . . . also a summer bonus scheme that encourages pilots to fly more hours.

“You can report sick if you are fatigued but you will lose financially if you do.

“There’s not that culture of thinking where you can speak up.”

Wizz Air disputes this as “hearsay”.

And what of the shortages in cabin crew?

Olivia Kerr worked as a flight attendant for BA for 22 years and is one of 50 taking it to a tribunal because, during the pandemic, she says she was told to accept a 40 per cent pay cut down to £17,000 a year or be fired.

“It was a massive cut,” says Olivia, who has now left the industry.

BA told us it restructured to survive and despite £4billion of losses most redundancies were voluntary. It would not comment on Olivia’s ongoing litigation.

And then there’s passport control, which Home Secretary Priti Patel recently described as operating in an “unsustainable and highly inefficient way”.

He added that with pre-pandemic summer traffic levels returning, “with ­current staffing you’re going to get queues significantly longer than three hours”.

And, as we learned, getting compensation for delays or cancellations is easier said than done.

Rory Boland, editor of Which?, tells me: “Let’s be frank, they don’t really care about customer care.

“They care about flogging you a cheap ticket. We can’t be in a situation where passengers are told these are your rights, but they can’t enforce them because the airline is uncontactable.”

So when, and how, will air travel get back to normal?

Clearly, it will mean paying more to attract people back into the sector, and that could well result in more expensive airfares.

But if that’s the way to avoid the queues, delays and cancellations, it’s perhaps a price worth paying.

On July 2, I flew to Corfu from Manchester airport and filmed the experience[/caption] The queue for the EasyJet bag drop started in the car park and it took me an hour and a half to reach the front[/caption] Melissa Robinson, from Leeds, spent two years planning her dream wedding in Cyprus only for family and friends to have their TUI flights cancelled from Manchester[/caption]

I waited 8 months to film this for You