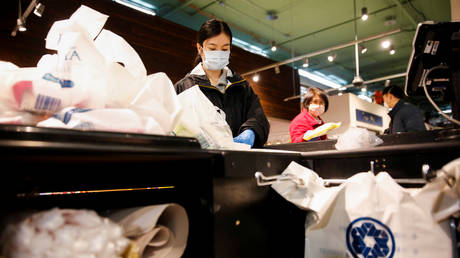 US President Donald Trump swiftly shut down the suggestion that Washington would suspend import tariffs for a quarter of a year amid the Covid-19 crisis, dubbing recent source-based reporting on the question as “fake news.”
Read Full Article at RT.com

US President Donald Trump swiftly shut down the suggestion that Washington would suspend import tariffs for a quarter of a year amid the Covid-19 crisis, dubbing recent source-based reporting on the question as “fake news.”

Asked about a new 'scoop' in the Wall Street Journal blaring from its headline “US plans to stop collecting import tariffs for three months,” the president dismissed the idea immediately, insisting it was not even on the table. He chastised Fox News correspondent John Roberts for asking the question. “Just more fake news, John. They've not even talked to me,” Trump said at Friday’s coronavirus briefing at the White House.

“Everyone keeps saying ‘Are you going to suspend the tariffs?’ The answer is no. President Xi never even brought it up last night, it wasn’t even discussed.”

Based on the word of anonymous “administration officials,” the Journal reported that the Trump administration would soon stop collecting import tariffs for three months, with companies remaining liable for the fees at a later time. While the story acknowledged it “wasn’t immediately known” when the move would be announced, and noted the president could still “overrule” the plans, it appears that happened faster than expected, with Trump rejecting the idea out of hand at Friday’s briefing.

Despite reaching a ‘Phase One’ trade deal with Beijing late last year, Washington still maintains a number of tariffs on exchange with China, including medical supplies such as masks and gloves, deepening existing shortages for urgently needed gear.

On Thursday, a bipartisan group of lawmakers called on Treasury Secretary Steve Mnuchin to order the Customs and Border Protection agency to defer tariff collections for three months to ease pressure on businesses. The United Nations, meanwhile, has also called for a worldwide ban on tariffs and other trade restrictions, as well as sanctions which might obstruct the flow of food and equipment, warning that the pandemic puts the “whole of humanity” in danger.

The focus on trade comes on the heels of a massive $2 trillion stimulus bill signed into law earlier on Friday, which will distribute cash payments to American workers, expand unemployment benefits and provide low-interest loans to small businesses, among other measures intended to offset the economic impact of Covid-19. The administration also invoked the Defense Production Act, ordering some companies to fast track medical supplies, including some 40,000 ventilators from General Motors.