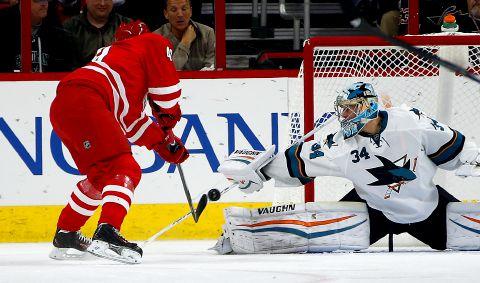 But Melnichuk still had some outstanding moments Saturday and gave the Sharks a chance to win before Phil Kessel scored in overtime to lift the Arizona Coyotes to a 5-4 victory at SAP Center.

Melnichuk made 27 saves in the loss, including 16 in a busy second period.

“He battled hard, he played hard,” Sharks coach Bob Boughner said of Melnichuk. “There were probably one or two that he wanted back. I’m sure there were some nerves for his first start in the NHL.

“He got his game in, and we got a point and I think that whole thing’s behind him now, and hopefully he feels more comfortable in his next start.”

That probably won’t be until next season, as the Sharks’ last game is Wednesday at home against the Vegas Golden Knights. Either Martin Jones or Josef Korenar, who had his own first NHL start last month, will likely get the nod.

Twelve goalies have made their first NHL starts with the Sharks, but only seven have come away with a victory. The last was Aaron Dell, who stopped 21 of 23 shots in his first NHL start on Oct. 18, 2016 when the Sharks beat the New York Islanders 3-2 at Barclays Center in Brooklyn.

Two Sharks goalies have posted shutouts in their first NHL starts — Evgeni Nabokov and Troy Grosenick. Nabokov stopped all 39 shots he faced as the Sharks tied the Colorado Avalanche 0-0 on Jan. 19, 2000. Patrick Roy made 15 saves for the Avalanche at the other end.

Grosenick’s debut was even more remarkable.

Called up from the Sharks’ AHL affiliate in Worcester just days earlier, Grosenick made 45 stops in a 2-0 Sharks win over the Carolina Hurricanes in Raleigh, N.C. to earn his first win. He was the 22nd NHL goaltender at the time to earn a shutout in his first start.

“I didn’t feel like it was too terribly tough of a game,” Grosenick said at the time. “It’s going to be really special to go back on it.”

Melnichuk, 22, has mainly split time this season between the AHL and the Sharks’ taxi squad. It’s been difficult, as the St. Petersburg, Russia native has had to spend a lot of time traveling in his first full year in the United States.

“It’s a tough season for him, as it is for everyone,” said Sharks defenseman Nikolai Knyzhov, who was Melnichuk’s interpreter after Saturday’s game. “It’s a very unstable atmosphere. Being in the AHL, going on the taxi squad, and going back on the road. At one point, he was on the road for almost a month.

“It’s not for everyone but he says that it’s a great experience and he wants to take away from it as much as he can.”

Here’s how Melnichuk’s first NHL start Saturday against the Coyotes stacked up with previous goalies who made their first starts with the Sharks.