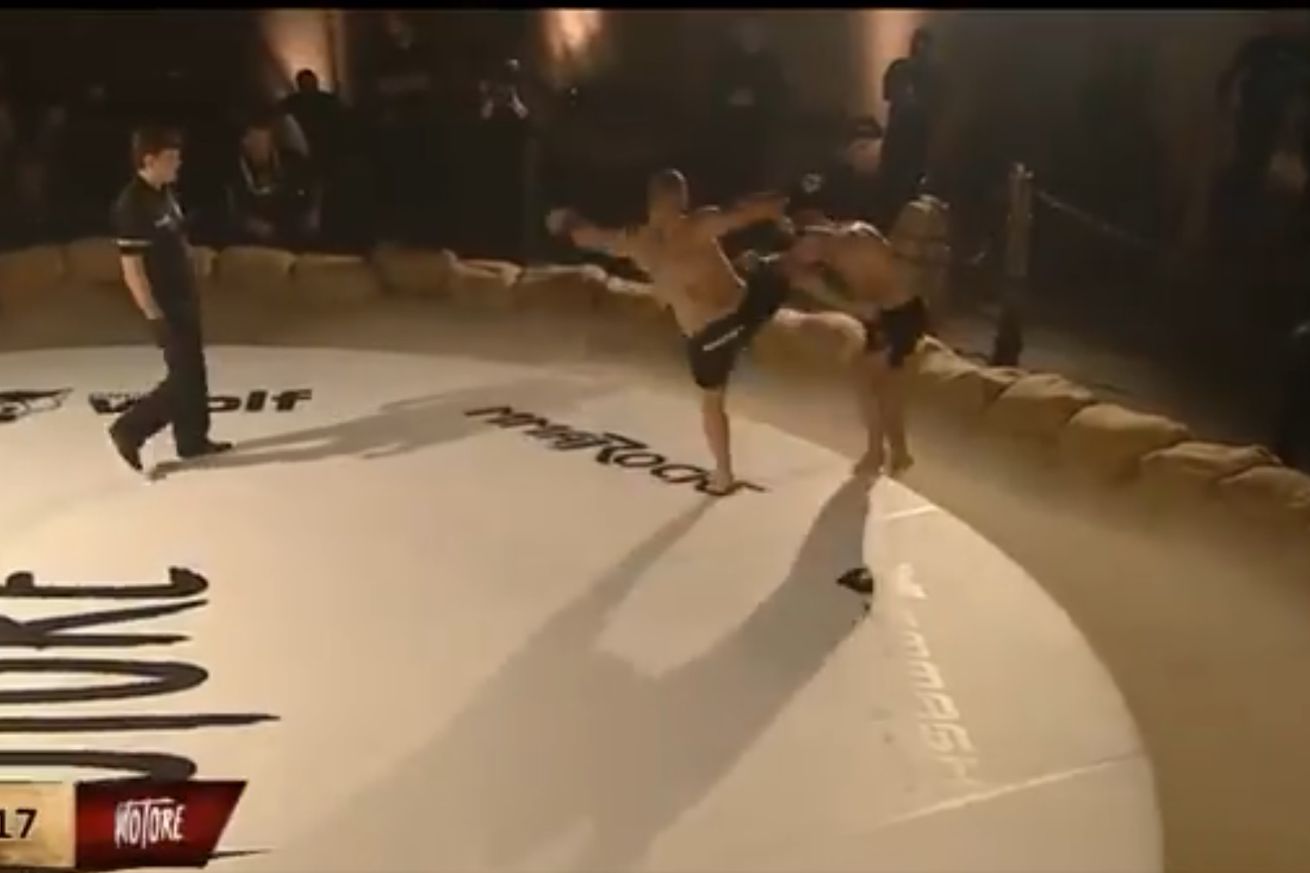 Welcome to the latest edition of Missed Fists, where we shine a light on fights from across the globe. In these hectic times where it seems like there’s an MMA show every other day, we’ve collected all the highlights that may have been overlooked.

AL: They’ve given us KSW, arguably the greatest MMA promotion on the planet. They’ve given us Fame MMA. And now, Poland has blessed us with what appears to be the final form of the evolution of moat fighting: Wotore.

JM: Don’t need the “moat” qualifier. This is just the final, most perfect form of combat.

AL: Available for purchase on their website, Wotore 1 appeared to be some combination of MMA, bare-knuckle boxing, vale tudo, moat fighting, and Bloodsport. Here’s @Jolassanda1 with their take on the situation:

in about 4 hours we have real vale tudo event in Poland
WOTORE 1
- 8 men one night tournament;
- open arena like on Bloody Sport;
- bare knuckle;
- head butts allowed;
- one round till they die;
- no time limits, no weight limits :O
PPV is here - https://t.co/LAI0sICOVv

If you’re not willing to take the plunge – heh heh heh – the opening ceremony and one full fight can be viewed for free on YouTube.

JM: Let me just say, any YouTube video that starts with the age-restriction “This content may not be suitable for all viewers” warning is already off to a tremendous start, just like Wotore is. From Artur Sowinski’s Looney Tunes hat, to the choreographed fight opening sequence, to the most perfect MMA format of all time, Wotore is here to fill the void left by CamSoda Legends MMA. (I love you forever CSL!)

AL: Don’t give up on CamSoda coming back.

If you’re just looking to dip your toes – heh heh heh – MMA Twitter has your back as always. Here are some of the scenes from last Saturday’s inaugural Wotore event in Katowice, Poland.

The Wotore fighters must select a stone to determine their place in the tournament (I assume) #wotore pic.twitter.com/ow5jsCdWy3

WRITING OF THE NAMES pic.twitter.com/jUpr0lYWEF

the fight is over pic.twitter.com/PB37ltoinY

The opening ceremony starts at around the 23:00 mark of the above clip, and it is bonkers. You’ve got a full drum ceremony, a martial arts exhibition, and then the “ring girls” taking part in an arcane ritual that appears to seal the fates of the doomed warriors who signed up for this barbaric show.

Then there’s the opening fight itself:

Near as I can tell, the first man to score two moatings wins, which is actually kind of humane. You know, if you ignore all the other stuff that you’re allowed to do before you drop your opponent into the smoky depths.

JM: I mean this with the absolute conviction of my entire heart: Wotore is what I’ve been waiting for my whole life.

AL: I’m still not entirely sure that this wasn’t all just a fever dream. I do know that I’m going to speak to our editor immediately about getting us a flight and media passes to the next show.

AL: Peter Aerts and Jerome Le Banner were both in action at a show called Heat 46 in Tokyo last Saturday.

Aerts and Le Banner are a combined 96 years old.

No, we did not get another epic chapter in their K-1 rivalry (Le Banner was actually competing in an MMA bout). But they did add to their storied careers – in their own way – with wins over opponents that I’m sure were carefully vetted and cleared by a responsible athletics commission.

And then Le Banner pushed his career MMA record to 4-3-1 by finishing Chang Hee Kim.

JM: Are we sure Aerts wasn’t competing in MMA? Because that kind of absurdity feels like it was made for no-holds-barred combat.

Also, after watching these two incredibly depressing clips, I think it’s safe to say that JLB would whip the s*it out of Aerts at this stage of their careers. Don’t get me wrong, it’s an indictment of JLB that it took that long to get the finish, but Aerts looked every bit of 49 and then some.

AL: When I was previewing this event on last week’s Fun F**kin’ Fights, I apologized to America for not being able to find any broadcasting information for HEAT 46. I assumed that some internet denizen would have this covered, but no, I was right, this thing wasn’t available ANYWHERE. We are talking some real dark web s*it, hence the shaky nature of the clips above.

In other words, much like Wotore, HEAT is exactly what combat sports is supposed to be.

Enough with the oddities and legends (as much as we love them), we’ve got some impressive quick hits to get to this week from Brave CF’s first-ever show in Slovenia (available for replay on FITE TV PPV). A joint show with the country’s World Freefight Challenge promotion, Brave CF 34 proved a fine exhibition for several young talents.

JM: This was an awesome bit of counter-grappling. But if you’re looking for something a little less technically brilliant and a little more beatdown-y, Brave also has that covered.

If the name sounds familiar, it’s because Hawes, 31, has done “The Ultimate Fighter” and Dana White’s Contender Series, fought for the World Series of Fighting and Bellator, and somehow has yet to find a promotional home – 2020 has got to be the year, right?

JM: Nothing wrong with being a fighting nomad. They’re a dying breed.

AL: The next clip features a fun post-fight exchange between former Bellator bantamweight champion Zach Makovsky and Velimurad Alkhasov, who suffered his first pro loss after losing a split decision to Makovsky.

JM: This was delightful, and I honestly thought they were going to keep it going after the first round. That hip toss from Alkhasov was gorgeous, by the way.

AL: I’m glad everyone from the fighters to their corners to the referee to the fans seemed to know they were messing around. Just imagine someone playfully double-legging, like, Mike Perry after a fight and then getting a straight right to the back of the head afterward.

Speaking of double-legs, there was nothing playful about this incredible slam by 20-year-old Austrian lightweight Mochamed Machaev:

It’s kind of a cliche comparison at this point, but that top-down angle really makes this look like a glitch out of the UFC video game.

JM: The only glitch here is Matjaz Vicar trying to snap his own arm in half trying to brace himself. Some guys just don’t know how to get Hulk Smashed.

AL: Machaev went on to win a unanimous decision and improve his record to 8-0.

Our last Brave clip can be filed in the Lethal Leg Kicks category, as well as Adventures in Officiating:

Marko Drmonjic clearly wins the battle of leg kicks, then lands another one while Matej Plavec is essentially falling into a fetal position. Somehow, this isn’t enough for the referee to step in, and poor Plavec eats a few shots to the head for good measure.

JM: I love when a fighter drops someone with leg kicks and then has the good sense to keep kicking their grounded opponents leg. Soften them up for the punishing punches. Excellent work from Drmonjic, who ABSOLUTELY should have the fight nickname Dr. Magic.

The ref’s nickname should be Dr. Kevorkian.

AL: We can’t say this enough, but it’s so great that LFA ended up on UFC Fight Pass. The promotion is definitely in a rebuilding phase, having sent so many talents up to the UFC in the last couple of years. It might lose another with the way Jordan Wright performed last Friday.

That’s Gabriel Checco on the receiving end of the dreaded “shoot into a shin to the head” sequence. Accidentally-getting-yourself-head-kicked-itis affects one in every four MMA fighters; call your doctor today if you or someone you know is suffering from this affliction.

JM: Checco? More like Checked-the-F-out. I’m sorry, but there are very few things as funny to me as watching a fighter with a mohawk get KTFO, especially when it’s by some kid that looks like he’s the quiet one in the back of chemistry who just happens to be farm strong.

AL: Wright is 10-0 now, and his lone loss on the Contender Series was erased when opponent Anthony Hernandez popped for the wacky tobacky. “The Beverly Hills Ninja” has won all of his fights by knockout or submission, so he’s a shoo-in to sign with a major North American promotion this year.

Twenty-four-year-old flyweight Jerome Rivera might be another year off, but he certainly looked Octagon ready with this mounted triangle that evoked memories of Poirier-Holloway 1.

What a finish from Jerome Rivera! #LFA80 pic.twitter.com/iSa5rJ63nE

JM: Mounted triangles just seem like the worst. Not only are you in a deep triangle and have an exposed arm, your opponent can also just elbow the ever-loving ass out of your head. Remind me never to be a fighter.

AL: The nastiest finish of the weekend comes to us from the boxing world, as Shohjahon Ergashev recorded a 2020 cover of “No Mas” by banging his fist off of Adrian Estrella’s internal organs.

Shohjahon Ergashev shows off his Insane power with a 1st round KO of Adrian Estrella to stay undefeated. #SHOBOX pic.twitter.com/z4DkVRpC3D

Estrella legitimately got struck with a freaking taser. His whole body leaps back and then convulses. And that was in the first round too! Imagine being Estrella, pouring your heart and soul into training for weeks, and then getting dusted inside of three minutes. And not just dusted, but “urinating blood for weeks” dusted. Ouch.

AL: I can’t tell exactly what Estralla is saying here, but I’m going to go with, “NO NO NO NONONONONONONONO,” or something to that effect.

Truly, words to live by.

If you know of a recent fight or event that you think may have been overlooked, or a promotion that could use some attention, please let us know on Twitter – @JedKMeshew and @AlexanderKLee – using the hashtag #MissedFists.