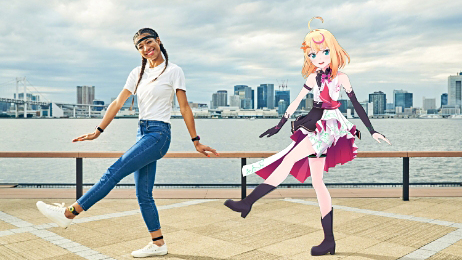 Sony just unveiled new mobile motion capture hardware called Mocopi, a series of lightweight sensors attached to your body that lets you capture motion data with a smartphone app. This will allow folk to perform their own motion capture anywhere for a fraction of what this hardware would typically cost and do it much easier than most modern solutions that require a PC or cameras.

Users can create 'avatar videos' using a smartphone app that will take your real-time motion data and translate it into movements for a preset or uploaded avatar, which by the looks of the promotional trailers, means you can finally take your VTuber catboy persona into the real-world.

The process seems straightforward. You strap six tiny Bluetooth motion trackers to your head, wrists, ankles, and hip. After calibration, all your movements are transmitted wirelessly to your smartphone, where your avatar mimics you in real-time.

According to the Japanese product listing page, you'll be able to export this data to other 3rd party software like Unity and MotionBuilder. So, you could, in theory, use this data for game development as a low-cost mocap alternative, assuming it all plays nicely with that software.

As far as Mocopi working with VR headsets like the Quest 2 or Sony's own PSVR headset is concerned: According to the Sony Japan press site (Google translated into English, mind you), they allude that there will be some level of compatibility with VR headsets.

Best VR headset: which kit should you choose?
Best graphics card: you need serious GPU power for VR
Best gaming laptop: don't get tied to your desktop in VR

Sony will release an SDK to developers on December 15 that will let them take the motion data and import it into various "metaverse services" in order to increase "the degree of video expression in virtual space." So a very strong maybe.

Mocopi is available for pre-order in Japan for 49,500 yen or $364 later this month and should be out in late January 2023. So the next time you're in Japan and see someone spontaneously break out into a dance at a park or back alley with little doohickies attached to their body, just stay clear; they are making content, baby.