Grab a Cyber Monday motherboard bargain to upgrade your current PC or for your next PC build.

Cyber Monday is a great time to grab some bargains for your next upgrade or build. Picking up a great motherboard deal is key to both of these plans, especially as you're not going to be dropping cash on a graphics card upgrade this deal season because GPUs are impossible to find right now. Plan ahead though, and you can save money now for that GPU upgrade when they do get back in stock. And if you want to pair with a new processor here are the best Cyber Monday CPU deals we've tracked down so far. You're welcome. 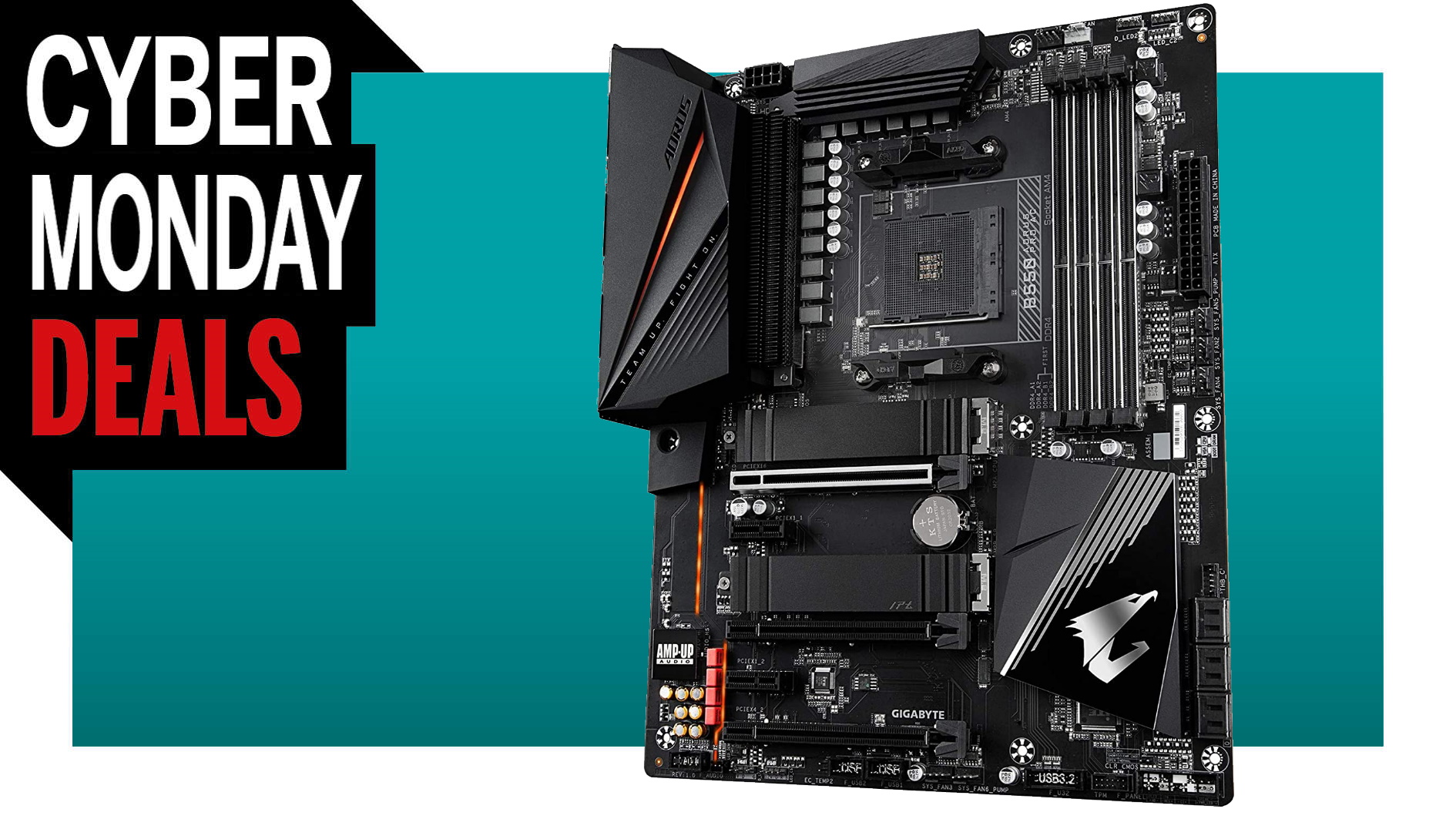 A new motherboard is an important part of the PC upgrade picture because it can add support for the latest core technologies like PCIe 4.0, M.2 drives, and the latest memory technologies for an overall boost to your system. The best gaming motherboards can also drag you up to date with the latest USB, Wi-Fi, and ethernet standards, as well as offering up much-improved audio. There's a good chance any motherboard you buy will be covered in RGB as well because that's definitely a thing now.

The good news about the motherboard market is that while there are some very expensive motherboard options available, there are also loads of quality budget options as well. And a lot of these are hitting the bargain bins this Cyber Monday.

For AMD Ryzen CPUs you'll find plenty of B450 motherboards, as well as some B550 mobos on offer. If you've got your eye on upgrading to Ryzen 5000 then the B550 boards will support the new chips from day one, while updates to the B450 have already started rolling out. So they're both good options.

When looking at motherboard upgrades, it's worth keeping an eye on the best Cyber Monday CPUs deals as well, as buying both in the sales can be a great option. Just try and keep your upgrade paths in mind. AMD will be switching to a new socket after the current generation, while Intel's 11th-gen CPUs, Rocket Lake, will launch in March and slot into current LGA 1200 motherboards.

Asus Prime B460M-A | Intel LGA 1200 | $79.99 at Amazon (save $20)
This really isn't a lot of cash to ask for an up-to-date motherboard supporting Intel's very latest chips. Yet more proof that Intel is now the budget offering. This Micro ATX motherboard offers up dual M.2 PCIe 3.0 slots, dual 1GB LAN, USB 3.2 Gen 1, and even manages to include Aura Sync RGB connectors. With that $20 Cyber Monday saving this is a steal. View Deal

Asus Prime B365M-A | Intel LGA 1151 | $63.99 at Amazon (save $16)
This Micro ATX motherboard may be small, but if you've got your mind on building a last-gen Intel machine, then this has a lot going for it. You get a pair of M.2 PCIe 3.0 slots for your drives, as well as USB 3.2 Gen 2 and USB 3.1 Gen 1 headers. Asus has also thrown its Aura Sync RGB lighting at this motherboard, so your build doesn't have to look boring. View Deal

Asus Prime Z390-P | Intel LGA 1151 | $99.99 at Amazon (save $35)
If you're looking to build a beefy last-gen Intel machine, then this is a fine motherboard for the task. It may not boast support for the latest tech, but it does have the features you need to make the most out of an 8th- or 9th-gen Intel CPU. The PCIe 3.0 M.2 slot gives you access to speedy SSDs, while the USB 3.1 Gen 2 header is useful too. And because it uses the Z390 chipset, you can overclock your CPU as well. There are only 4x SATA ports, though, and if you use both M.2 ports, only you'll lose one of those as well.View Deal

MSI MPG X570 Gaming Edge Wifi | AMD AM4 | $179.99 at Newegg (save $30)
It isn't just the budget motherboards that are enjoying money off this Cyber Monday, with this high-end X570-powered MSI seeing a $30 price cut. This is a big motherboard that supports the latest AMD chips (after a BIOS update) and mostly the latest technologies, with dual M.2 PCIe slots, support for USB 3.2 Gen 2 being the obvious highlights. Note that while it's got WiiFi in the name, this isn't Wi-Fi 6, but 802.11ac. Still a great deal though.View Deal

Gigabyte B550 Aorus Pro AC | AMD AM4 | $169 at Amazon (save $21)
B550 motherboards are a bit more expensive than their B450 predecessors but do offer up support for PCIe 4.0, which can give them the edge if you're after next-gen storage performance. They can also offer more up-to-date connectivity, as this Gigabyte board shows, with 2.5 GbE LAN and USB 3.2 Gen 2 ports. You get Gigabyte's RGB Fusion 2.0 support for lighting up your rig like a Christmas tree too. View Deal

Asrock B550 Phantom Gaming 4 | AMD AM4 | $99.99 at Newegg (save $15)
When they were first released, the majority of B550 motherboards cost almost as much as the feature-rich X570 boards. Asrock was one of the first to buck this trend, and the likes of the Phantom Gaming 4 is a great option if you're on a tighter budget. You still have access to PCIe 4.0 M.2 drives, fast RAM, 1 GbE LAN, and USB 3.2 Gen 1, just at a reduced price. Sounds good to us. View Deal

What to look out for in a Cyber Monday motherboard

Unless you're buying a motherboard purely to capitalize on a CPU deal that's too good to miss, you should try and keep an upgrade path in mind when buying a new motherboard. Motherboards should last a few generations, and allow you to upgrade to the next big thing when it's released. If you are buying a last-gen motherboard for a bargain chip, don't spend too much money on it (stay below $200), as it's already out of date.

It's also worth bearing in mind that if you buy a motherboard for a next-gen CPU, then you may need to install an interim CPU in order to actually flash the BIOS so that you can use the new chip. Motherboard manufacturers are beginning to wake up to this problem, with some offering the ability to flash the BIOS without needing a CPU or RAM to be installed—which is clearly witchcraft, albeit very useful witchcraft.

The other questions you'll have to ask yourself are whether you'll want to overclock, as that tends to be the remit of the high-end chipsets only, and what sort of connection standards you'll need. If, for instance, you're going to be connecting wirelessly, then Wi-Fi 6 support makes sense, although that's only available on the top-end motherboards as well.