DANCING On Ice star Vanessa Bauer has broken her silence on her romance with Joey Essex.

Former Towie star Joey, 32, has been paired with Vanessa, 26, for the upcoming series of Dancing on Ice – but recent Instagram posts and outings have sparked rumours their relationship could be more than professional.

However, Vanessa has set the record straight and said their relationship is purely professional.

When asked if there was any truth behind the romance whispers, Vanessa exclusively told The Sun: “We are just skating partners.”

When asked if she could see a romance blossoming in the future, Vanessa confirmed: “No, no, we are just skating partners.”

Looking sensational in a black velvet mini dress at the opening night of Elf the Musical, Vanessa opened up her and Joey’s gruelling training sessions.

READ MORE ON DANCING ON ICE 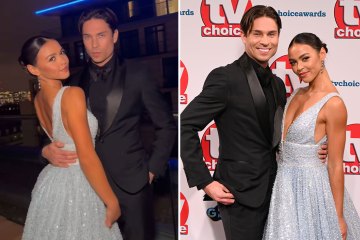 Vanessa explained she was initially worried that TV star Joey would not take the competition seriously but was quickly proved wrong.

“He takes Dancing on Ice extremely seriously; I was a bit worried at the beginning that he was going to joke around too much.

“But we are having a lot of fun and at the same time we are training so hard.

Most read in News TV

FROM LOVE TO LAURA

“He really takes me seriously and he takes the show seriously.”

Despite Joey slicing his finger recently in training and his numerous falls on the ice, Vanessa said she has full trust in her partner to carry out the huge lifts.

“He falls quite a bit but it’s because he’s throwing himself into it, I mean you can’t really avoid all these injuries,” Vanessa continued.

“I trust him to lift me, he’s finding his feet and eventually he will lift me up.”

The star admitted that she and Joey have been putting the hours in aware that the competition will be fierce this year.

Vanessa added: “I think the competition is quite high this year, I think everyone is quite good and everyone really wants to do the show this year.

“So, you never know until you see them on the ice, I’ve not seen the contestants skate yet.”

Earlier this month The Sun told how Joey was quickly infatuated by Vanessa after being paired with her for the ITV show – despite being pictured snogging Love Islander Maura Higgins just days earlier.

A source said: “They’ve certainly got close very quickly but maybe it’s no surprise – Vanessa is stunning and Joey has always been a charmer.

“As soon as he was paired up with her those who know him reckoned he’d fancy her like mad, and he’s clearly not wasting any time making a move.”

Joey was pictured passionately snogging Maura after the National Television Awards in October – prompting rumours they might start dating.

But he appears to have quickly moved on, while Maura has insisted she is single.

Game24.pro
TikTok roleplayers have made a viral game out of trading with capitalism cats This external cooler is as big as a PC Give your Steam Deck a sweet docking station to live in for 24% off this Cyber Monday God of War Ragnarök могла лишиться одного из персонажей

Today24.pro
‘How many Uber drivers does it take to pick up a disabled person?’: Disabled person says 3 Uber drivers canceled on them because of their service dog One of The Greatest Britons in History - Joe Calzaghe Crypto Lender Matrixport Raises Valuation to $1.5B Despite FTX Collapse I make $1,000 a month by promoting Amazon products on social media. It only takes 5 hours per week — here's how I set up my side hustle.