ROBERT LEWANDOWSKI’S World Cup curse continued against Mexico – but his Polish boss is certain the predatory striker will stop firing blanks in the tournament soon enough.

Barcelona’s lethal striker, 34, has a whopping 76 goals in 135 appearances for his country.

But he is yet to break his duck in his four World Cup outings, and suffered the indignity of missing a penalty in the opener with Mexico, which finished 0-0 on Tuesday.

Poland boss Czeslaw Michniewicz has no doubts it will not be long until Lewandowski gets back to what he does best and is backing him to end his hoodoo against Saudi Arabia on Saturday.

Though he hinted it will be up to the legendary forward if he wants to carry on taking spot-kicks after his miss against the Mexicans.

Michniewicz said: “We talked with the entire team and we debriefed the entire match with Mexico. I spoke with every single player.

READ MORE ON THE WORLD CUP

“When it comes to the penalties, Robert is still No1.

“As a striker of course he will make a decision whether he will shoot or pass it on to someone else.

“He feels ready to score for Poland.”

Lewandowski, once a target for Blackburn Rovers when he was still playing in his home country, netted an incredible 344 goals in 375 games for Bayern Munich.

He moved to Barcelona in the summer where his rate is even closer to a goal a game, with 18 plundered in 19 games.

It makes his World Cup tally of zero all the more curious – but team-mate Jan Bednarek reckons there is only one thing on the striker’s mind right now.

Defender Bednarek, on loan at Aston Villa from Southampton, added: “Robert Lewandowski is our captain, he’s a striker, he wants to score as many goals as he can but for him the good of the team is most important. He wants us to win.

“He hides his pride in his pocket and he really focuses on working as hard as he can.

“It’s not important to him if he scores or not, he wants us to win the match.

“He’s got his individual objective but I am convinced he places the team’s success at the top.

“This is the best striker in the world. I hope he leads us to win. I don’t know if he will score or not but the most important thing is for us to win.”

Michniewicz admitted that some of his players may have been overawed by the occasion in their stalemate with the Mexicans.

But he does not believe that will be an issue against the Saudis, who are the story of the tournament so far after their shock victory over Argentina.

He added: “We want to score goals, we will be more courageous, perhaps the stage fright of the first game paralysed some people to a certain degree but that won’t be there anymore.

READ MORE ON THE WORLD CUP 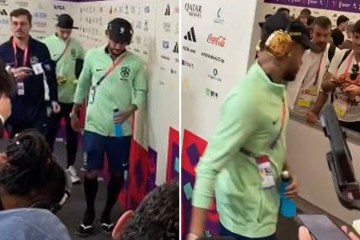 “We will play a good game, I believe that. We are ready to play in our style. We know what advantages Saudi Arabia have, what players they have.

“They beat Argentina and we tied with Mexico, but I think we are equal teams. We will be fighting until the end to get out of our group.”

Today24.pro
If you saw children on the roof… How veterans with disabilities can get a VA loan with bad credit ‘People need to stop getting mad at non tippers and start getting mad at the apps’: Lyft driver paid $50 for ride that cost $242 Man repeatedly punched Columbia protester, knocking her out: NYPD