AMANDA Owen has spoken out following the revelation she will not appear in a brand new Our Yorkshire Farm spin-off following her marriage collapse.

The reality TV star shared a post on Instagram where she declared she had ‘more s**t to deal with’ following the explosive news.

Alongside a video of her driving a tractor, the Yorkshire Shepherdess wrote: “Another day, more s**t to deal with. Good job it comes with the territory.”

It was recently announced that Channel 5 had been forced to axe the popular programme following Amanda and Clive’s split and that they had awarded him his own spin-off show as a consequence.

The show is being replaced by a new programme – Beyond The Yorkshire Farm: Reuben & Clive – featuring Clive and his eldest son, which launches next month.

But, Amanda will not be part of the show following her split from her husband earlier this year. 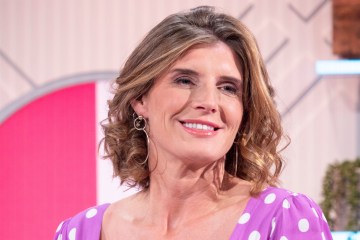 Millions of viewers have watched Clive and wife Amanda – dubbed the “sexy shepherdess” – raise their nine children over five series of the hit show, which first aired in 2018.

Channel 5 confirmed on Monday that it wouldn’t be returning for a sixth series, however.

The news will come as a huge disappointment to fans who have followed the family and were hoping for another series to document how they have managed to continue to co-parent and co-exist on the farm following the split.

However, there is clearly no bad blood between Amanda and Reuben following his decision to appear alongside his father in the brand new series.

The mother and son also shared a series of loved-up selfied amid the news.

Reuben will appear on the show which will put his and his father’s business on display as well as chronicle his life with girlfriend, Sarah Dow.

Following her decision to not be involved in the programme anymore, Amanda has since been confirmed to be appearing in her own separate programme.

She will front a new travel series for rival channel More4 as well as Channel 5 bosses hinting they could be working on a seperate reality TV series with Amanda.

The Sun exclusively revealed last year that the pair were battling to save their marriage before Amanda confirmed the split earlier this year.

In the age of megachurches, communion has become a big business

Today24.pro
The Darkest Secret and Tragedy of Edwin Valero Why the power grid is an 'attractive target' for domestic terrorists: report Hans Niemann in the sole lead at the 3rd El Llobregat Open In the age of megachurches, communion has become a big business