I’M A Celebrity fans have demanded hosts Ant and Dec bring back an iconic part to the show ten years later.

Viewers of the long-running programme, which celebrated its 22nd series this year, have begged the duo to take part in one of the Bushtucker trials for charity.

Ten years ago, Ant, 47, and Dec, 47, were seen taking part in a special edition of the Celebrity Cyclone challenge for charity.

The finale trial sees the celebrities have to battled being pummelled with air, water and inflatables on a slippery uphill slope.

The stars are tasked with moving giant stars into place before a klaxon sounds in order to win a luxurious meal for the jungle camp.

While Ant and Dec normally watch from the sidelines, ten years ago the pair took part in the challenge to raise money for charity.

READ MORE ON I'M A CELEB 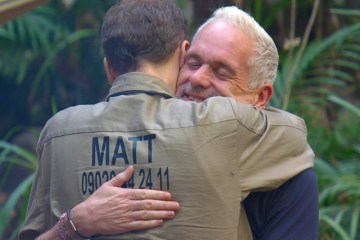 Now, fans of I’m A Celeb are calling for the duo to try again, ten years after they were seen taking part on telly in 2012.

Taking to Reddit ahead of the latest Celebrity Cyclone this weekend, one fan wrote: “The hosts should show them how it’s done.”

Another chimed in: “That was ten years ago, Time to try it out again.”

In 2012, Joe Swash welcomed Ant and Dec took to the trial clearing in order to raise money for charity event Text Santa.

The pair were challenged to raise a mammoth £100,000 for the charity causes, by taking part in the Celebrity Cyclone.

They were given just ten minutes to try and get up the slippery hill, managing to win the jackpot money for charity.

It comes after it was confirmed that the famous Celebrity Cyclone course is set to return this weekend.

The trial will return on Saturday night as the contestants don their usual attire of skimpy superhero-themed T-shirts and capes.

I’m A Celeb duo Ant and Dec revealed that the much-loved task is “not be missed” as the task returns to Australia for the first time in two years.

Game24.pro
Competitive Farming Simulator is like an agriculture Grand Prix God of War Ragnarök могла лишиться одного из персонажей Give your Steam Deck a sweet docking station to live in for 24% off this Cyber Monday TikTok roleplayers have made a viral game out of trading with capitalism cats

Today24.pro
One of The Greatest Britons in History - Joe Calzaghe Crypto Lender Matrixport Raises Valuation to $1.5B Despite FTX Collapse ‘How many Uber drivers does it take to pick up a disabled person?’: Disabled person says 3 Uber drivers canceled on them because of their service dog I make $1,000 a month by promoting Amazon products on social media. It only takes 5 hours per week — here's how I set up my side hustle.