But Mr Selfridge star Kara Tointon doesn’t mind admitting her biggest, baddest and most demanding role yet is being a mum to her two little boys, Frey, 3, and Helly, 21 months.

In fact, she reckons balancing motherhood with her career has left her with the sort of super skills that M15 would envy.

“They say you only use a certain amount of your brain and it’s not really until you’re pushed that you use what you potentially could use. As a parent you’re put into that corner.

“All senses are at the ready and you’re thinking of things in advance, beyond belief.” 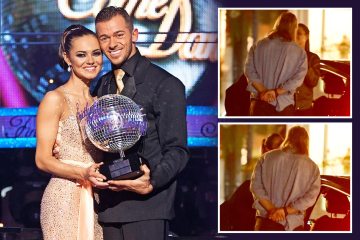 KARA DOES THE SPLITS 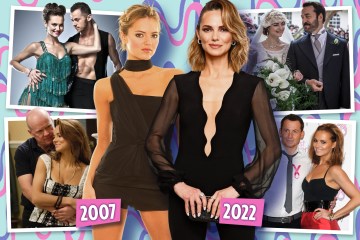 Dame Harriet Walters plays the older version of the role. It’s great to be back in front of the camera and while being a working mum can be complicated, Kara finds becoming a parent has added new depth to her acting.

She said: “As cheeseball-y as it sounds, becoming a parent broadens every thing in every sense. Everything is in perspective, but it also gives you so much to draw upon emotionally.

“You only have to think of them and it sends you… I’m quite surprised at how much actually becoming a parent has definitely helped me with my career in that sense.”

Having children is a big milestone and Kara has another one coming up – her 40th birthday.

Many dread entering mid-life but Kara is ready for the next decade after taking “a pummelling” in her thirties.

Her devastating decade saw her five-series drama The Halcyon axed after just one outing and her beloved mum died just three months after she had her first son Frey.

Major change to childcare rules set to save money for parents

Then the Covid-19 pandemic hit and her wedding to fiancé Marius Jensen was postponed.

She said on turning 40: “It’s a strange thing. I thought that I would feel very odd about nearing 40 but I don’t.

“I’m really excited. My 30s have been a pummelling of sorts in different ways… Everyone goes through the same shit at different times and it’s just how it spreads through a lifetime. I’m really looking forward to my 40s.”

She explained: “I’m just one of those beings that has maybe learned a lot of lessons late. I had a really lovely childhood and I was very in a way sort of sheltered.

“Through my 20s was all kind of fluffy and nice and then the 30s everything came at once and so you come out of that a little more rounded and you know, a little less worried about the trivial silly things in life.”

The last ten years have seen Kara re-evaluate what is important to her and she feels stronger now and armed with layers of wisdom she didn’t have before.

She said: “You realise the important things. We’re only here for such a short amount of time. We’ve just got to make the most of every phase of life and take your wins and take the best of it and roll with the punches and just get up brush yourself off and come out of it stronger. You layer up.”

There is one important change that Kara has made – she has set herself boundaries and stopped trying to please everyone.

“Boundaries has become my mantra. Through my twenties, boundaries were non-existent and that’s taught me a few lessons.”

The loss of Kara’s mum Carol when Frey was still a baby left her devastated but the actress is determined to remember their time together with happiness.

She said: “We had mum with us for three months. It was a very, very strange. I can’t quite put it into words just yet perfectly, but it was these two rites of passage happening and I didn’t quite know where I was. It was a really surreal time.

Most read in Showbiz

Gemma Collins shows off her shrinking figure in a pink swimsuit

“In a sense, I’m just so lucky that I had her there for that three months. That was really so special.”

Making memories is important to Kara and before her mum died, Kara and her sister Hannah recorded their last conversations. She said: “My mum was quite ill at the time, which I can’t speak that deeply about it, but we were having a lot of conversations my mum, my sister and I that we would record.

“I haven’t listened to them yet, and I don’t know when I will decide to, but it was really comforting. It’s little things like stories of holidays, reminiscing, laughing our heads off about certain things and going through recipes that we loved because my mom was an amazing cook…”

The recording inspired her new storytelling app – Tell – which allows users to record their own audiobooks, tell their own stories and share memories with relatives.

The app is a joint project with her former-fiancé Marius Jensen. The pair announced their engagement in Hello! Magazine in October 2018, however the pair recently split.

On one day having more children, Kara, whose actress sister Hannah recently had a baby girl with The Inbetweeners star Joe Thomas, said: “I’ve decided that in life I’m very much a go-with-the-flow person. It’s lovely to plan.

“But ultimately, whenever I’ve ever planned, the opposite has happened. So I’m quite happy to kind of take each phase as it comes and concentrate on each phase so I never say never to anything but I at the moment I’m very happy with my two little munchkins keeping me on my toes.”

The TELL Storytelling app is available to download from the App store and Google Play www.tellapp.com

Game24.pro
Competitive Farming Simulator is like an agriculture Grand Prix Taiwan's semiconductor industry set to suffer after US/China trade disputes This external cooler is as big as a PC This DIY 4090 glass table build sees beauty meet the beast

Today24.pro
I make $1,000 a month by promoting Amazon products on social media. It only takes 5 hours per week — here's how I set up my side hustle. LAMB BUTTER Will Melt in Your Mouth! Ancient Food on the Silk Road! Billionaire investor Howard Marks touts a bargain boom as interest-rate fears grip markets - and predicts a surge in companies going bankrupt One of The Greatest Britons in History - Joe Calzaghe