﻿
Ru24.netNews‑life.proNews‑life.org29ru.net123ru.marketSportsweek.orgIceprice.info123ru.net
Цепочки на шею
All the things an Apple Watch can do without an iPhone
Report: Spurs contacts with Serie A star ‘are increasing’ ahead of January
Monaco, Standard Liège and Heart of Midlothian are already training at MFC
Urgent warning to anyone who’s had common virus over ‘increased risk of killer heart attack’
I work on cruises – there’s a secret code you never want to hear on a ship
Kraken edge Kings in highest-scoring NHL game of season 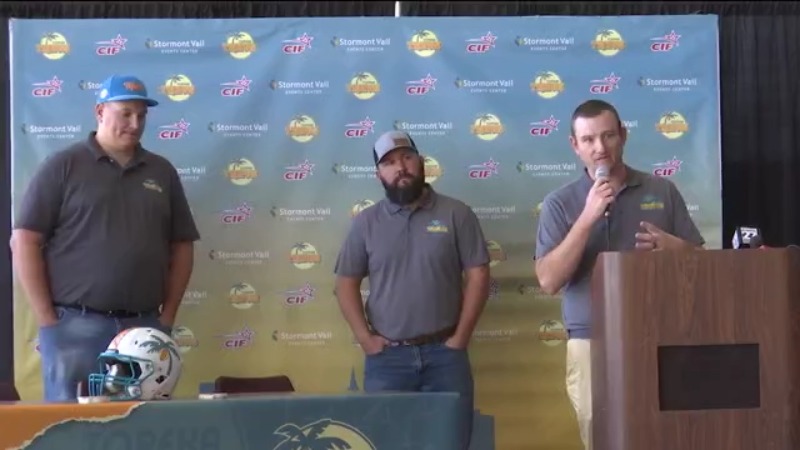 TOPEKA (KSNT)- The Topeka Tropics have returned to the capital city, now with new ownership.

The new ownership group consists of three Topeka businessmen, all focused on giving the community the football team they want. They are Trevor Burdett, owner of Sacred Leaf CBD here in Topeka; Chad Logan, owner of Logan Business Machines; and Joshua Barr, owner of Graystone Painting and Finishing. They want to let fans know, they are not going anywhere.

"Ownership group is local, and we're all vested in Topeka, it's not just about this team, it's about this community and doing what's best for our community," said Barr. "We're all local business owners and we want Topeka to continue to grow and thrive."

The ownership group has signed a three-year contract with the Stormont Vail Events Center and they plan to fill all those years with success.

"Success takes good leadership and it takes process, and we bring that to the table right off the bat," said Barr. "We want to be good leaders in our community but also for the team, and it starts at the top, so if we're making good decisions and supporting the team, and they know they're gonna be here long term, we think this team will be much more invested from the players to the coaches."

Speaking of local, the General Manager of the team is Topeka West Head Coach Russell Norton who served as the GM at the end of last year. As Norton and the team look for its next head coach, they do not plan to travel far.

Tropics team revived, staying in Topeka after all

Norton does plan to build a successful product on the field, but until then, he wants fans to at least enjoy themselves.

"Arena Ball is actually different," said Norton. "90% of fans, don't even know who wins or loses the arena game, but 100% of the fans know whether they had a good time or not."

Tropics fans do not have to wait long, as the team will play in the 2023 season starting in March of next year. The official schedule will be released tomorrow.

Willow is back, and he brought an incredibly fun show with him

Game24.pro
TikTok roleplayers have made a viral game out of trading with capitalism cats This DIY 4090 glass table build sees beauty meet the beast Give your Steam Deck a sweet docking station to live in for 24% off this Cyber Monday Competitive Farming Simulator is like an agriculture Grand Prix

Today24.pro
I make $1,000 a month by promoting Amazon products on social media. It only takes 5 hours per week — here's how I set up my side hustle. One of The Greatest Britons in History - Joe Calzaghe Crypto Lender Matrixport Raises Valuation to $1.5B Despite FTX Collapse Billionaire investor Howard Marks touts a bargain boom as interest-rate fears grip markets - and predicts a surge in companies going bankrupt