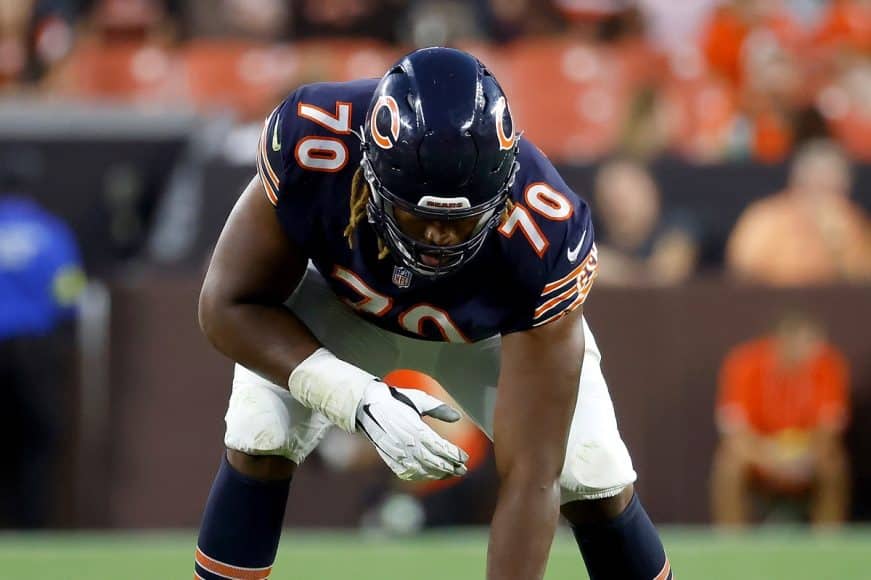 The Chicago Bears put a lot of faith in Braxton Jones when they made him their starting left tackle. Most teams would never put the blind side of a quarterback in the hands of a rookie, much less a 5th round pick. That is how much Jones impressed the coaching staff during spring practices and training camp. He seemed to hold his own in the preseason, but everybody knew the real tests were still to come.

ESPN seems to think the Bears offensive line has more than carried its weight through the season’s first two weeks. According to their analytics division, Chicago ranks 1st in the NFL in pass block win rate at 88%. PBWR is a measurement that indicates when a lineman can sustain his block for 2.5 seconds or longer. Jones is at the heart of that success. He ranks 5th in the entire league thus far with a 96% win rate. 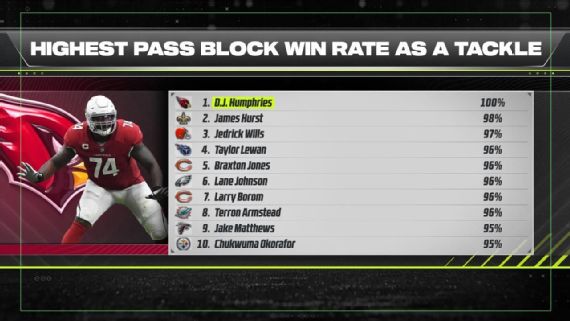 Other stats corroborate those numbers.

NFL Next Gen Stats reveal that Bears quarterback Justin Fields leads the entire league in average time to throw at 3.26 seconds. That measures the amount of time from the snap to the ball coming out. It isn’t a perfect metric since a QB scrambling plays a part in such things. That said, solid pass protection also plays a role. Putting the two stats together reveals what many already see on tape. That Fields is holding the ball too long at times.

That shouldn’t be a surprise. He’s starting over in a new offense. That inexperience will lead to second-guessing when rhythm and timing throws are required. Bears coaches are working tirelessly to help break him of those habits. It will take time. Until then, hopes are high that the line can continue to give him adequate protection.

This is a good example how technique can help an OT anchor against a bullrush. Braxton Jones stays square & upright, catching the defender with good hand placement and is able to anchor. Larry Borom opens his hips & bends at the waist and is pushed back into Justin Fields #Bears pic.twitter.com/eftibc4i5M

Braxton Jones survived quite the gauntlet.

People picking on him over the past two weeks haven’t come to terms with what the rookie experienced. In a span of seven days, he had to face Nick Bosa, Preston Smith, and Rashan Gary. Those three players alone combined for 34 sacks last season. Yet Jones only gave up four pressures and one sack combined to that trio. If he can survive that crucible without experience, then it stands to reason he’ll get even better as he continues stacking games.

The Bears never made any grand proclamations about Braxton Jones. They merely said they saw a young, talented athlete with the building blocks to become a starter. Even they were surprised by how quickly he picked things up in the summer. What he’s doing is not normal. Players from his background and his position don’t have instant success in the NFL. It is remarkable, to be honest.

If Jones keeps improving, everything changes for the Bears.

Finding a good left tackle is so difficult in the NFL. Poles landing one in the 5th round of his first draft may go down as one of the biggest steals of the past decade. There is also the fact that Teven Jenkins has begun to flourish at right guard. Chicago may have two serious building blocks up front. That will make the team’s job far easier when the 2023 off-season begins.