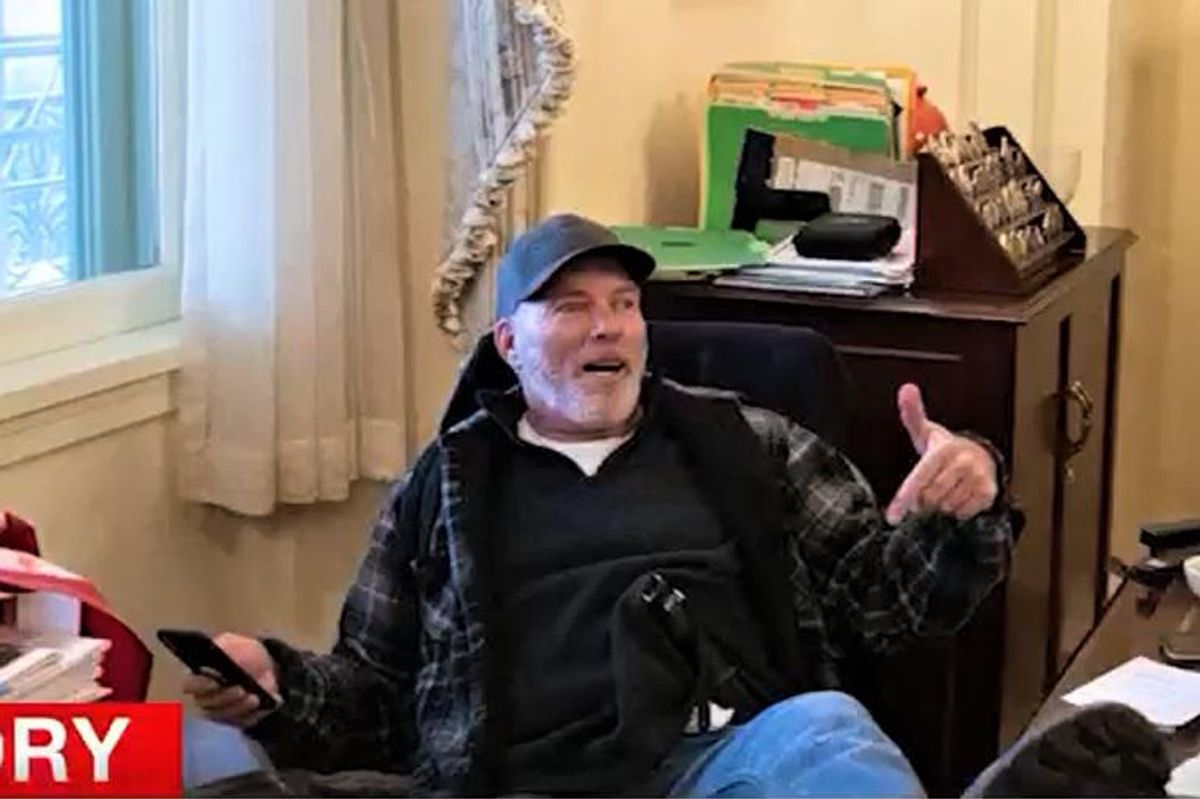 The U.S. Capitol rioter who posed for photos with his feet on Nancy Pelosi's desk doesn't want prosecutors to call him a rioter during his trial.

Attorneys for Richard "Bigo" Barnett, who faces multiple charges for his role in the Jan. 6 insurrection, submitted a list of descriptive terms they hope a judge will prohibit prosecutors from using to describe the Arkansas man and other Donald Trump supporters who stormed the Capitol to help overturn the 2020 election results.

"Specifically, Mr. Barnett requests that this Honorable Court order the exclusion of 'terrorism,' 'terrorist,' 'insurrection,' 'insurrectionist,' 'mob,' 'rioter,' 'treason,' 'traitor,' 'sedition,' 'conspiracy,' 'attack on the Capitol,' "attack on democracy,' 'threat to democracy,' 'attack on Congress,' 'white supremacy/supremacists,' 'police were killed,' 'stun gun,' and other inflammatory language related to groups such as the 'Proud Boys' and 'Oath Keepers,' as well as references to places on the grounds or in the Capitol where he did not go," his attorneys said in a court filing.

Barnett's attorneys also asked the court to exclude any news reports that mention police officers who died after the riot, and they want to prohibit prosecutors from introducing video or photo evidence of violent clashes with police officers.

READ MORE: Trump's greatest talent is leading to the death of his empire: biographer

"Mr. Barnett did not participate in or witness said battle," his attorneys said. "Therefore, it is irrelevant and serves no probative purpose."

The attorneys asked the court to bar prosecutors from telling the jury that Barnett, who carried as "ZAP Hike N Strike 950,000 Volt Stun Gun Walking Stick" at the Capitol, legally owned guns and was involved in Second Amendment groups, and they also don't want them to introduce any evidence about Trump's own legal fight to overturn his election loss.

"Any reference to President Trump’s (hereinafter 'Trump') Stop-the Steal lawsuits, court challenges, or issues raised by Trump’s lawyers about the election and outcomes of those lawsuits should be prohibited as unrelated, highly prejudicial, and overall irrelevant," the attorneys argued. "Mr. Barnett is not an attorney and the legal significance of any lawsuits brought by parties, unrelated to Mr. Barnett, to challenge the elections is irrelevant to Mr. Barnett’s conduct on January 6, 2021 and should be excluded."