﻿
Ru24.netNews‑life.proNews‑life.org29ru.net123ru.marketSportsweek.orgIceprice.info123ru.net
Что с сайтом 123ru.net (нас читают и публикуются у нас). Уже более 70 млн. просмотров в мире.
From strokes to depression – Dr Jeff answers your health questions
27 Ridiculously Effective Products From Target That Are All Under $15
Constance Wu accuses 'Fresh Off The Boat' producer of sexual harassment and intimidation: 'I kept my mouth shut for a really long time'
NASA delays Artemis I launch due to Tropical Storm Ian
I’m not ashamed of losing my virginity to a 27-year-old as teen – we need to be more open about sex, says Vogue Williams
"Raju Srivastava was a family friend; I frequently spoke to his wife after his heart attack," says Rohit Verma- Exclusive

THE petition to have Holly Willoughby and Phillip Schofield “axed from TV” has reached a fresh milestone.

The pair are under fire from angry viewers after watching Phil, 60, and Holly, 41, sail past thousands of mourners waiting in line to see the Queen lying-in-state at Westminster Hall.

Now a petition to have the This Morning presenters fired has hit more than 65k signatures.

Holly and Phil joined millions of Brits to pay their respects to the late monarch last week.

However, many weren’t happy when they found out that they managed to dodge the queue – which at one point was 24 hours long – because they were filming a segment for their show.

However Holly and Phil, and This Morning bosses, have insisted that the pair did nothing wrong and “did not jump the queue” to see the Queen’s coffin, because they were working for the media.

More on This Morning

This Morning fans swoon over slimmer than ever Alison Hammond 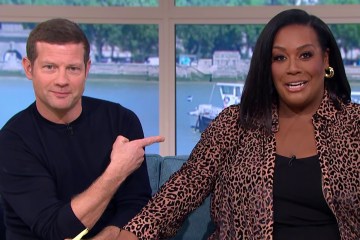 And The Sun has exclusively revealed that Holly refuses to budge from her job on the sofa.

Although This Morning fans feared she had been ‘crying all night’ on Wednesday morning, an ITV source confirmed: “Holly will not quit.

“She has been devastated by all the negative reaction after she turned up to work at Westminster Hall with Phil on Friday, but she’s not going to resign.

“This Morning has been her life for more than a decade and the only way she’d consider quitting at this stage is if viewers really didn’t want her there.

“She’s tried to give their side of the story on the show today and they’re both hoping to move on from it now.

“Bosses know Holly is still a hit with viewers and are counting on her working her magic on the show for a good while yet.”

Many TV stars, including Holly and Phil’s former This Morning co-host Eamonn Holmes, have spoken out against them this week.

And former Britain’s Got Talent contestant Francine Lewis last night slammed them for their “rude” behaviour to guests on the show.

“If they had just come clean in the first place there wouldn’t be so much outrage,” insisted Francine to Dan Wootton Tonight on GB News.

“At the end of the day, to me, this is very typical of Holly and Phil to think they have a VIP status.

“I do think they think they’re TV royalty and a cut above the rest.

I have experience of being on their show and in all the years of being on TV and doing interviews I have never felt so unwelcome on a sofa.

“Everyone thinks they’re the TV darlings and Holly Willoughby is so lovely, but I’ll tell you something…

“They didn’t greet me, say hello or even goodbye after the interview. It was just done. That was twice I was on there with them.

“Whereas I had a totally different experience with Eamonn and Ruth.”

Game24.pro
Project Cars 2 is gone from Steam forever Call of Duty is betting big on AI. Will it pay off? Discord is doing reverse Twitch drops Streamer apologizes for leaking game reveals, says he did it for clout and 'the buzz'

How to invest in communications stocks, a sector that's huge, highly diversified, and growing — offering something for almost every type of investor

Today24.pro
How to invest in communications stocks, a sector that's huge, highly diversified, and growing — offering something for almost every type of investor Trump Claims He Declassified Documents Using Special Powers! How to Get MICROSOFT OFFICE for FREE in 2022! Sweet Potato Souffl