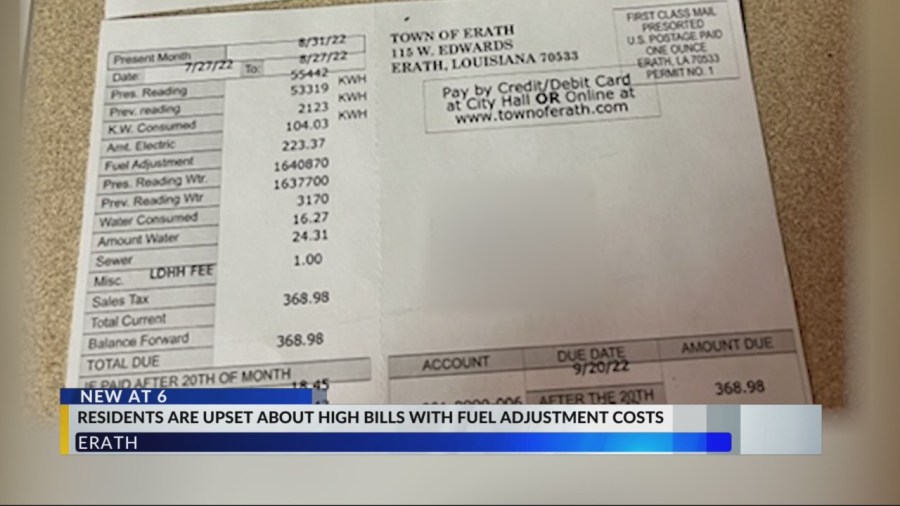 Residents in Erath are upset about high fuel adjustment costs on top of their high electricity bills.

ERATH, La. (KLFY) - Residents in Erath are upset about high fuel adjustment costs on top of their high electricity bills.

Many residents told News 10 that their electricity bills are getting out of hand with fuel adjustment costs added to their bills.

Parents given tickets while waiting on children at Westside Elementary

One Erath resident, Sheila James, said that she is getting by on her bills with the help of her children.

James is grateful for her children's help since her husband passed away from cancer. However, she worries about older people with no support or way of paying their bills.

She told News 10 that she called the public service commissioner’s office and was told by the lady who answered the phone, “if you pay to your municipality, not directly to Cleco, etc., that the commissioner's office has no jurisdiction over that.”

James also said that when she asks for clarity on the reason the bills are high, she is informed of the explanation of the fuel adjustment, which fluctuates.

“Whatever comes from Cleco, but I don’t get a breakdown of what comes from Cleo to the town. It’s not very clear on our light bills,” she said.

Thanks for signing up!

Watch for us in your inbox.

News 10 reached out to Mayor Taylor Mencacci about the resident's concerns.

He said that the fuel adjustment is coming from their energy provider Cleco. The way the town bill breaks down is they have the town cost, which to residents is a fixed rate of 4.9 cents a kilowatt, and the businesses cost is 5.2 cents a kilowatt.

“For our budget for the year, it’s basically off those rates and a base of the consumption of the people in town. That doesn’t get adjusted,” said Mayor Mencacci. “The cost comes directly from Cleco, and that is divided amongst kilowatt usage in the town of Erath. It’s just rolled over directly to the customers; to myself as a citizen.”

He encourages citizens to look at Henry Hub Natural Gas Prices. He said customers could see what amount Cleco charges by going to their kilowatts use. Then divide it by the fuel surcharge amount, and that’s the amount that Cleo is charging per kilowatt.

The mayor said they bill the consumers for their sewage, water, and utilities, but there’s no inflated cost per person.

“We’re working with Cleo, our current partner, and with other associates that we’re a part of. We’re working on building a substation where we can get a more competitive rate when we buy utilities,” said Mayor Mencacci. “We cut our budget over the past three years. We’re going on our fourth by $100,000 a year. So we’re making the right choices with the town to not have to increase rates to continue to keep the rates the same from our side.”

The mayor said they are thankful the town of Erath has done things needed to serve the citizens, and they are not like other towns in financial situations.

“We take it very seriously. We get audited every year, and the auditors find us that we’re in line with common practice in the state of Louisiana,” he said.

The mayor also said it is his priority to get a substation, but he needs citizens to do their part as well.

“It’s definitely a two-way side, right? We don’t want the citizens to have to do it all themselves but do citizens really want to depend on the government to do everything for them? I don’t think so,” he said. “In the end, we don’t charge people extra. It’s not a magic pencil. We go to each resident we don’t like. We charge them more. No, it’s directly related to the kilowatts used to the cost of electricity. So use more, you will get a higher bill.”

“Cleco’s policy is not to disclose customer information, which includes our wholesale power contracts. The town of Erath is a wholesale customer, so we’re unable to share contract information.”

The mayor said if you have any questions about your bill, contact city hall.