Что с сайтом 123ru.net (правда)
Hey, this water tower painting of Johnny Cash looks like it's peeing
Warriors’ Jordan Poole called for technical foul for arguing a call that gets overturned
21 Pieces Of Trivia About FX's "Atlanta" That Explain A Lot About The Show
IndiGo appoints Pieter Elbers as CEO as Ronojoy Dutta retires
Austin is hitting 100° more frequently. Here's when it's most common
Varanasi: Gyanvapi survey report to be placed in court today 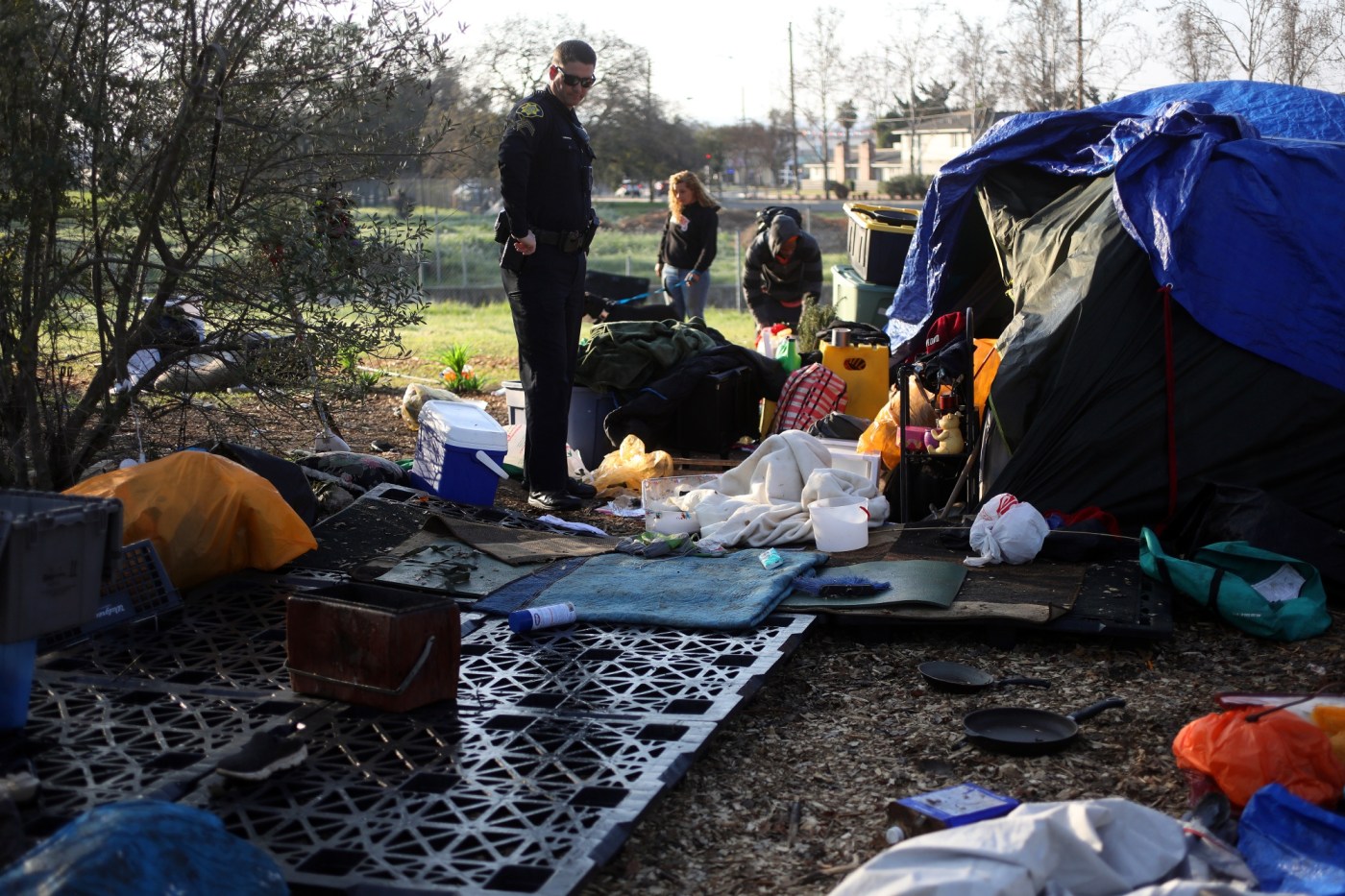 The nearly two dozen residents will now have to stay away from the property, which the police plan to monitor for trespassing.

CONCORD — LeAnn Matthews watched as an excavator cracked one of her old wooden crates in half before rumbling over to a large bin to discard the splintered pieces.

It was the last bit of furniture Matthews had left behind at the tent she called home for three years before police showed up Wednesday to clear out the homeless encampment at San Miguel Road.

Matthews and the nearly two dozen other residents who lived there will now have to stay away from the site, which is a stone’s throw from a skatepark and sits underneath BART tracks.

It was a sudden, unexpected disruption for a camp that, like many others around the Bay Area, sprung up at the height of the pandemic and had been mostly left alone by authorities as the focus changed to preventing the coronavirus from spreading among vulnerable homeless residents.

For the past six months, the encampment’s residents had fostered an informal understanding with police: They could remain as long as they didn’t commit crimes, openly use drugs or litter the premises with trash or excrement.

But when complaints began mounting from nearby homeowners that the campers were violating those rules, the police department decided to take action. It also had just learned that in exchange for leasing the skatepark site owned by BART, the city had agreed to keep trespassers off BART’s property.

“We had been unaware of it,” police Lt. Tamra Roberts said about the city’s lease. “BART called us and started asking about the situation. They want to keep the area free of people during nighttime maintenance, because metal objects could fall off the tracks — not only can that damage vehicles, it can injure people.”

Members of the nonprofit Concord Community Alliance showed up Wednesday morning to protest the cleanup; the night before, they chanted “stop the sweep!” at a City Council meeting, begging officials to call off the action.

When Councilman Tim McGallian suggested that “people who don’t want to take the help” were fueling the homeless crisis, several speakers criticized him for painting all unhoused people with the same brush.

At the encampment, as she watched police dismantle their makeshift homes, Matthews lamented forgetting to grab some succulent plants she was growing inside a large pot once used for nighttime fires.

“I wish I could have remembered to bring that,” Matthews said.

Concord Community Alliance member Ady Olvera helped a dozen residents relocate their belongings to other parts of the city. But the homeless shelters in and near Concord have almost no vacancies and strict priority lists, she said.

“We had to move a lot of them to a smaller area,” Olvera said. “Now those places are going to look very crowded, and people there are going to complain. If the city could just set up an area with a hand washing station, portable showers, bathrooms … we could take them down there.”

The option of moving to a shelter, even if there’s space in one, doesn’t appeal to Matthews, who previously lived at Premier Inns in Concord, which had been transformed into an adult care center earlier in the pandemic.

Forced to live in close proximity to people struggling to avoid slipping back into their drug addictions, Matthews feared she too could relapse if she stayed there much longer after being sober three years.

Another resident, Tampa Twuan, has other issues with shelters. He was allowed to bring only two bags of belongings because of space limitations, and strict curfews prevented him from staying with his girlfriend.

“I don’t want to throw away all my stuff for a bed,” Twuan said. “That doesn’t help my homelessness situation. It doesn’t give me a job or money. I still wake up with the same problems.”

Though drugs are what caused him to become homeless, that’s not what’s keeping him that way, he added. Other people drink and do drugs, but they happen to live in a house so are left alone in peace, he said.

“I’m not going to sit here and pretend we’re all saints — most of us do drugs, don’t have a job, some of the stuff (at this encampment) is probably stolen — but we’re not the scum of the earth,” Twuan said. “We’re people too.”

Lt. Roberts said shelter rules are not unreasonable, and many of the camp residents did little to prevent spoiled food, human waste and drug needles from piling up on the property, despite several warnings from police.

The city has a CORE team that helps homeless residents find shelters, but Matthews said they don’t come around often enough. Many were around on Wednesday, however, and one approached her to say a local shelter may have an opening for her very soon.

Another helpful hand came from Concord Communities Alliance member Laura Nakamura, who crossed through the caution tape cordoning off Matthews’ tent and retrieved her forgotten succulents.

Matthews cracked a rare smile as she thanked Nakamura. The plants will now join a cartful of belongings headed to the next home she finds, whether under a roof or in another camp.

Night Sky is a warm, comforting sci-fi with too much filler