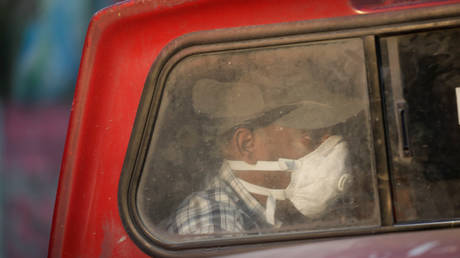 The chief surgeon and director at one of Haiti’s major hospitals was kidnapped on his way into work, triggering protests from the facility’s staff, who have refused to take any new patients until the doctor is freed.
Read Full Article at RT.com

The chief surgeon and director at one of Haiti’s major hospitals was kidnapped on his way into work, triggering protests from the facility’s staff, who have refused to take any new patients until the doctor is freed.

The surgeon, Dr Jerry Bitar, was abducted soon after leaving his home for the Bernard Mevs hospital in Haiti’s capital of Port-au-Prince on Friday, an administrator at the facility told Reuters. Crowds gathered outside the hospital to demand Bitar’s release, chanting slogans and declining treatment for any new arrivals.

“Hospital staff decided not to take any new cases for the time being,” said the administrator, Carla Puzo, adding: “We will continue to look after those already here.”

Hospital workers protest the kidnapping of Dr. Jerry Bitar who was kidnapped today while on the way to work.

"We will not continue to work without the release of Dr. Bitar."

"This is a hospital that accepts everyone, whether they can afford it or not." https://t.co/6k0VIeyN1o pic.twitter.com/5SNrdFRKon

The kidnapping of Bitar, who runs the hospital alongside his twin brother, comes as such abductions are on a steep rise in the country – the poorest in the western hemisphere, according to the World Bank – with bandits taking residents hostage and demanding ransom payments.

Haitian President Jovenel Moise pleaded for Bitar’s release in a national address on Friday, dubbing the surgeon a “general” in the war against the pandemic and calling on police and judicial authorities to do all in their power to find the kidnappers.

Though health officials in Haiti have confirmed fewer than 10 cases of the illness, the rapid spread of Covid-19 elsewhere prompted Moise to declare a national emergency, telling reporters on Thursday that the country's borders, ports and airports would be closed starting at midnight, with exceptions made for cargo. Haitian authorities last week also ordered schools, factories and places of worship to close their doors, as well as imposing a curfew in hopes of preempting further spread of the virus.

The Caribbean nation currently has only around 64 ventilators, according to a 2019 study by the Research and Education consortium for Acute Care in Haiti (REACH), making a major outbreak of coronavirus – which can cause severe pneumonia-like symptoms – a particular risk to its population of 11 million.