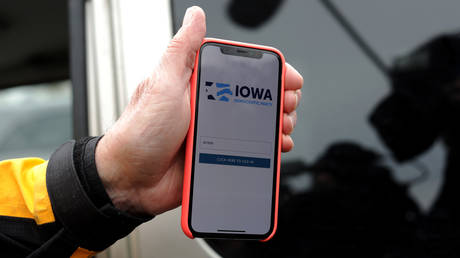 The same issues that led to the Democratic debacle in Iowa earlier this month are poised to make next week’s vote in Nevada equally hellish – yet party leaders seem unwilling to connect the dots or recognize the problem.
Read Full Article at RT.com

The same issues that led to the Democratic debacle in Iowa earlier this month are poised to make next week’s vote in Nevada equally hellish – yet party leaders seem unwilling to connect the dots or recognize the problem.

Early voters in Nevada have already faced long lines, technical difficulties, and monumental uncertainty about the voting process with voting underway since Saturday due to close Tuesday before the general caucus this coming Saturday.

We’ve seen this movie before

The slow-motion car-crash caucus volunteers have sketched out in their heads bears a strong resemblance to the events of Iowa. They’re willing to discuss it in interviews with the media, but always anonymously, for fear of angering what is apparently a vengeful party. But the Democratic National Committee chair Tom Perez and his state-level minions insist all is well.

The off-the-shelf Google forms that were quickly substituted for the buggy app that killed the Iowa caucus have already malfunctioned at some early voting sites, leaving some Nevadans waiting for three or four hours trying to vote. Meanwhile, no one seems to be on the same page regarding how the results from 80 early voting sites will be distributed among the 2,000 precincts where caucuses are to be held. Local politician Dan Rolle discovered the paper ballots used for early voting lacked precinct numbers, seemingly guaranteeing the party would be unable to count those votes and distribute them to the proper precinct by Saturday.

8.) @nvdems could not possibly have enough people ready to count (in rank choice voting) all of these paper ballots, and THEN deliver them to the right caucus site by Saturday. Remember for #NevadaCaucus there are 1800+ precincts. This is a big logistics problem!

Some volunteers have reportedly received no training in using their DNC-purchased iPads, which they are supposed to use to scan the paper ballots marked up by early voters. A web-based Google app that has been dubbed the “Caucus Calculator” is supposed to divvy these up and send them around to the precincts for caucus day - wrinkles pointed out by Rolle notwithstanding. Caucus site leader Seth Morrison warned that volunteers were using an “untested software tool,” advising CNN viewers in Nevada to vote early because the volunteers had “never seen or handled” the tool being prepared for Saturday’s caucus. Perez seemed more concerned that a CNN reporter had called the “online tool” an “app” than he was to learn that volunteers didn’t know how to use it. At the same time, Rolle observed that the tool wasn’t being used at all.

One presidential aide suggested to the Washington Post that Nevada Democrats were “making it up as they go along” in their belated rush to conjure up a technological solution to replace the Shadow app. As an added wrinkle, Nevada was supposed to use two versions of the app, which was notoriously built by former Hillary Clinton staffers with money from the Pete Buttigieg campaign - one to tabulate the early votes, and another for the caucus.

Keeping everyone in the loop regarding replacement processes has proved difficult, with multiple campaigns’ aides complaining that notice of a critical conference call nearly passed them by. One aide was unable to join in at all because he was in the middle of a training session. Another update on process reportedly made it to journalists before the party distributed it to all the campaigns.

The party has reportedly brought in “security experts” to troubleshoot early voting issues, though this is hardly encouraging given the prevalence of DNC insiders among these so-called experts. The replacement process for the Shadow app was reportedly designed with input from the Department of Homeland Security, the DNC, and Google, and Nevada Democratic Party executive director Alana Mounce insisted the party was “confident in our backup plans and redundancies” in a memo to the campaigns on Thursday.

Nevada Democrats have done their best to squelch rumors that the contest is rigged, explaining that former Buttigieg staffer Emily Goldman, hired earlier this month as “voter protection director” for the party, will not have the ability to affect the caucus outcome. And the progressive watchdogs have moved on to Utah, where the state party chair has a history of virulently attacking Vermont senator Bernie Sanders.

Sanders leads the pack of Democratic contenders in Nevada, according to RealClearPolitics, with former vice president Joe Biden trailing by three points. Buttigieg, the beneficiary of the Iowa mess, lags behind even billionaire Tom Steyer. Sanders emerged the victor from the New Hampshire primary, though media coverage mystifyingly focused on the second-place finish of Buttigieg and Minnesota senator Amy Klobuchar - even talking up New York plutocrat Michael Bloomberg, who wasn’t on the ballot in that state, rather than discuss the democratic socialist’s triumph.